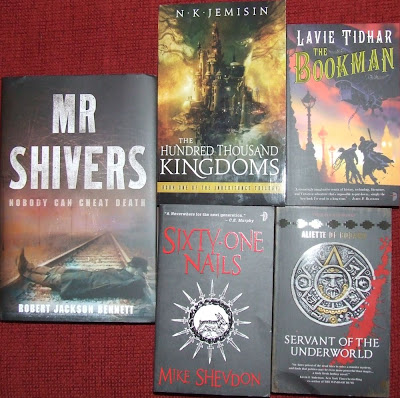 These are the latest arrivals in my mailbox:
- "Mr. Shivers" by Robert Jackson Bennett (through the courtesy of Orbit Books);
It is the time of the Great Depression. The dustbowl has turned the western skies red and thousands leave their homes seeking a better life.
Marcus Connelly seeks not a new life, but a death – a death for the mysterious scarred man who murdered his daughter. And soon he learns that he is not alone. Countless others have lost someone to the scarred man. They band together to track him, but as they get closer, Connelly begins to suspect that the man they are hunting is more than human.
As the pursuit becomes increasingly desperate, Connelly must decide just how much he is willing to sacrifice to get his revenge.
- "The Hundred Thousand Kingdoms" by N. K. Jemisin (through the courtesy of Orbit Books);
Yeine Darr is heir to the throne of the Hundred Thousand Kingdoms. She is also an outcast. Until, that is, her mother dies under mysterious circumstances.
Summoned by her grandfather to the majestic city of Sky, Yeine finds herself thrust into a vicious power struggle for the throne. As she fights for her life, she comes ever closer to discovering the truth about her mother’s death and her family’s bloody history – as well as the unsettling truths within herself.
With the fate of the world hanging in the balance, Yeine will learn how perilous it can be when love and hate are bound inseparably together, for both mortals and gods alike.
- "The Bookman" by Lavie Tidhar (through the courtesy of Angry Robot Books);
When his beloved is killed in a terrorist atrocity committed by the sinister Bookman, young poet Orphan becomes enmeshed in a web of secrets and lies. His quest to uncover the truth takes him from the hidden catacombs of a London on the brink of revolution, through pirate-infested seas, to the mysterious island that may hold the secret to the origin, not only of the shadowy Bookman, but of Orphan himself…
- "Servant of the Underworld" by Aliette de Bodard (through the courtesy of Angry Robot Books);
Year One-Knife, Tenochtitlan – the capital of the Aztecs. The end of the world is kept at bay only by the magic of human sacrifice. A priestess disappears from an empty room drenched in blood. Acatl, high priest, must find her, or break the boundaries between the worlds of the living and the dead. But how do you find someone, living or dead, in a world where blood sacrifices are an everyday occurrence and the very gods stalk the streets?
- "Sixty-one Nails" by Mike Shevdon (through the courtesy of Mike Shevdon).
There is a secret war raging beneath the streets of London. A dark magic will be unleashed by the Untained… unless a new hero can be found.
Neverwhere’s faster, smarter brother has arrived. The immense SIXTY-ONE NAILS follows Niall Petersen, from a suspected heart attack on the London Underground, into the hidden world of the Feyre, an uncanny place of legend that lurks just beyond the surface of everyday life. The Untainted, the darkest of the Seven Courts, have made their play for power, and unless Niall can recreate the ritual of the Sixty-One Nails, their dark dominion will enslave all of the Feyre, and all of humankind too.
Thank you all very much!
Posted by Mihai A. at 12:18 PM

I will read and review THE HUNDRED THOUSAND KINGDOMS by N. K. Nemisin next month. It go good reviews.

I heard good things about "The Hundred Thousand Kingdoms", so I will read it very soon too :)

Good Books. I read bookman and I love it... Man you are a lucky guy receiving all those books. I have almost two thousand books and I had to buy them all.

Perkunos, it is true, I am really lucky to receive many books :)
I am still buying a few more though ;)