Cover art - "The Best of All Possible Worlds" by Karen Lord 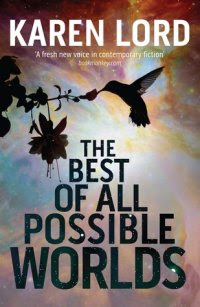 I have quite a few reviews to catch up with, but lately I am having difficulties in finding free time to write them all. Still, I do hope that one day I would be able to do so. One of the novels that falls in this category is Karen Lord’s “Redemption in Indigo”. In a period when dark fantasy seems to be on high demand Karen Lord’s “Redemption in Indigo” is a delightful and optimistic novel. With an original setting, a wonderful main character and a lovely story, “Redemption in Indigo” left me in a cheerful and enthusiastic mood. I am not certain when I would be able to put all my thoughts on “Redemption in Indigo” on paper, but I am sure that next year Karen Lord has a new novel coming up. “The Best of All Possible Worlds” has an equally positive sounding title (it is a philosophy of religion too), but also a beautiful and bright cover (the UK edition). Karen Lord’s new novel will be published by Del Rey in the US and Jo Fletcher Books in the UK on February next year. Not only that, but the publishing rights of Karen Lord’s “The Best of All Possible Worlds” were sold in Spain and Germany as well. I already put Karen Lord’s novel on my reading list for 2013, but until “The Best of All Possible Worlds” will be released we can admire again the beautiful cover artwork for the UK edition designed by petercottondesign.co.uk.

When civil servant Grace Delarua is assigned to work with Dllenahkh from the new Sadiri settlement, her routine job in the government of Cygnus Beta suddenly becomes very interesting. The Sadiri were once the galaxy’s ruling élite – until their planet’s biosphere was poisoned, leaving Dllenahkh and his fellow-refugees the excess males of a decimated population, desperate in their search for stability, security . . . and wives.
Delarua joins Dllenahkh on a quest to distant communities founded by past Sadiri settlers. Delarua is impulsive, garrulous and fully immersed in the single life; Dllenahkh is controlled, taciturn and responsible for keeping his community together. Delarua shuns deeper connections with men; Dllenahkh is part of a community that has lost most of its women.
They both have a great deal to learn . . .
The Best Of All Possible Worlds is a magical tale of survival and identity: individual, familial, national, global and human.
Posted by Mihai A. at 1:20 PM