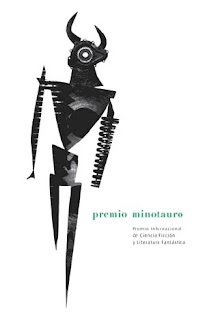 Premio Minotauro, the international science fiction, fantasy and horror award offered to the best unpublished novel by a Spanish or Latin American author, celebrates its 10th anniversary this year. Organized for the first time in 2004 by Ediciones Minotauro, a publishing house with more than 55 years of experience on the Spanish speculative fiction market, Premio Minotauro is awarded by a jury of seven persons chosen by the publishers, consists in a prize of 10,000 euro and the respective novel is published by Ediciones Minotauro. The previous nine winners of the award are:

The jury of the X International Science Fiction and Fantasy Award organized by Ediciones Minotauro, formed by Ángel Gutiérrez and David Zurdo (the previous winners), Fernando Delgado, Juan Eslava Galán, Laura Falcó, Ángela Vallvey and José López Jara (as secretary) will decided the winner of the 10th Premio Minotauro from the list of five finalists:

The winner of the 10th edition will be announced in Madrid on 12th February.

For the 10th edition of Premio Minotauro a total of 590 manuscripts have been received, almost triple than the previous edition and the highest number of entries since the inauguration of the award. Once again the manuscripts came from a broad geographic range, most of them, 362, received from Spain, followed by 199 from Latin America, especially Argentina, 66, and Mexico, 55. For the first time in the history of the award manuscripts in digital format were accepted and with this occasion the geographic coverage increased, reaching countries such as United States, Australia, China, Tunisia, Netherlands or Haiti. More than 90% of the received manuscripts, 543, came in electronic format.
Congratulations and good luck to all the nominees!
Posted by Mihai A. at 1:00 PM