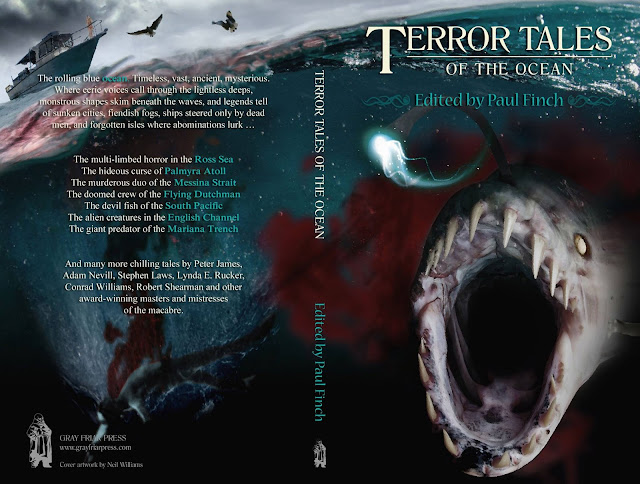 Terror Tales is one of my favorite series of short story collections, these anthologies edited by Paul Finch and published by Gray Friar Press are a wonderful combination of chilling new tales, grim legends and terrifying folklore. Soon, the 9th volume of this series is set to be released and although I am not in the possession of the full table of contents there is still the cover artwork to work with. This time Paul Finch is venturing to the bodies of water with “Terror Tales of the Ocean” in search of frightening stories and legends and Neil Williams’ cover captures the atmosphere of the collection very well. The unknown and danger lurking beneath the surface, situations that can become unpleasant are hinted in a full display of teeth and blood. Of course, there is more to the theme than the cover suggests, but it works for me and I feel that it sets the mood nicely.

And many more chilling tales by Peter James, Adam Nevill, Stephen Laws, Lynda E. Rucker, Conrad Williams, Robert Shearman and other award-winning masters and mistresses of the macabre.
Posted by Mihai A. at 3:30 PM

I love these kinds of short stories and the fact it's a series that makes it even better. I prefer a good series over a one timer most of the time. I am currently into Robert Gryn's Suns of the End series, it's magnificent!! robertgrynbooks.com is his site with all the info. Been the best sci-fi/fantasy read for me in a while!

Becky, I love short stories and this series of anthologies are wonderful and I enjoy them a lot.