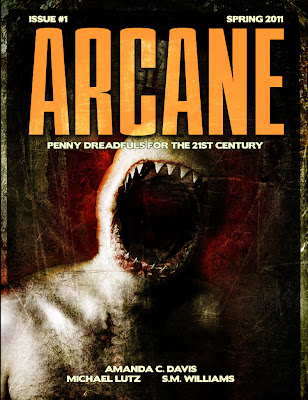 Before going on the summer holiday I reviewed the first issue of “Arcane Magazine” saying at the time that it would be a shame for this new and interesting magazine to die after its first appearance. Well, unfortunately it did, but fortunately only to be resurrected immediately in a new form. Nathan Shumate, the editor of “Arcane Magazine”, announced the transformation of Arcane, Penny Dreadfuls for the 21st Century from the magazine to an annual anthology series. I would have liked to see more issues of the magazine, but I know that keeping such a publication can be a struggle. Therefore, I am happy that it is not a disappearance into oblivion, but a transformation. And since the first issue, that is now a prelude to the “Arcane” anthology series, was interesting I am looking forward to the first collection of new “Arcane” stories scheduled for release on January 2012.