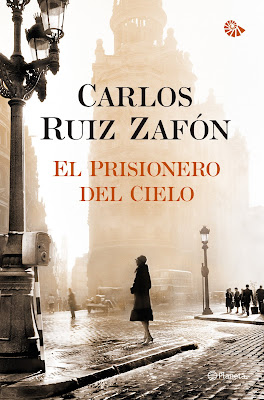 My Spanish is nowhere near as good as I would like it to be, but I would absolutely love to get my hands on a copy of Carlos Ruiz Zafón’s latest novel, “El Prisionero del Cielo” (The Prisoner of Heaven), in its original language. Especially since it will be released on 17th of November in Spain and I do have to wait a bit longer for a translated edition to read. After the initial release announcement of “El Prisionero del Cielo”, pretty much surrounded by mystery, now we do have a cover art for the new Carlos Ruiz Zafón’s novel and an all too appetizing synopsis. And how can it not be, when the third novel in a scheduled series of four featuring the exciting Cemetery of the Forgotten Books has as main characters the two remarkable heroes of “The Shadow of the Wind”, Daniel Sempere and Fermín (who is one of the most delightful characters of my reading experiences). Here is the synopsis of the novel found on Planeta website in my translation attempt.

Barcelona, 1957. Daniel Sempere and his friend Fermín, the heroes of “The Shadow of the Wind” are back on a new adventure to face the greatest challenge of their lives. Just when everything begins to smile on them, a disturbing character visits the Sempere’s bookshop and threatens to reveal a terrible secret which lay buried for two decades in the dark memory of the city.

To know the truth, Daniel understands that his destiny leads inexorably to a confrontation with the greatest shadows: those that grow inside him. Brimming with intrigue and excitement, “El Prisionero del Cielo” is a masterly novel where the threads of “La Sombra del Viento” (The Shadow of the Wind) and “El Juego del Ángel” (The Angel’s Game) converge through the magic of literature and leads us to the mystery that hides in the heart of the Cemetery of the Forgotten Books.

They don't sell ebooks yet, but I think that you can order (now preorder) the book there and have it shipped to your country. Or else, i'm sure that the ebook will be available through several spanish sites like leqtor.com, www.laie.es or several others. Ebooks, though, are a little bit more expensive in Spain than in other countries.

I confess that even though I'm spanish I have yet to read Ruiz Zafón novels (they are hugely successful in Spain, of course, but I haven't read them yet).

Anyway, I hope that you enjoy the book :-)

The first three chapters are up here:

I used to buy the Spanish editions of CRZ's books in Borders, but now that they've closed, I'll have to search the Spanish section at Barnes and Nobles.

Thank you guys for all the links.

Membrillu, you gave me an excellent news, I didn't know about amazon.es. That will be an excellent way to improve my Spanish and find some wonderful books :) Thank you!

You are very welcome :-)

does anyone know when or if this book will be released in the US and the rest of Latin America?

Does anyone know when it will be available in B&N's Spanish section? I bought The Angel's Game in Spanish from them before the English translation came out, but I don't remember the timeline exactly, and I'd rather not pay 40 euros to have it shipped to me from amazon.es!

If you haven't read "Shadow of the Wind" then you should. It's a great story with marvelous characters.