Besides Final Frontier, the book fair that looks pretty much like a speculative fiction convention I talked yesterday, there are other signs of an invigoration of the Romanian science fiction, fantasy and horror genres. There are plenty of printed and online magazines dedicated to the speculative fiction and there are efforts of bringing the community together, but what I find extremely encouraging is the growth in number of the anthologies published in Romania and featuring local writers. Until recently you could count such local short stories collections on the fingers of one hand, but lately this situation seems to change, the Romanian writers have more and more opportunities to be published in a professional assembled anthology. The latest two, “Zombies: The Book of the Living Dead” edited by Mircea Pricăjan and “Time Travels” edited by Antuza Genescu.

If the speculative fiction is a small niche horror has a worrisome coverage on the Romanian market. And I always find extremely odd the position in which this wonderful genre finds itself here. We have an extremely rich folklore, mythology and traditions involving or touching the elements of horror, but the genre is seen as pariah in Romania. As a matter of fact, until two or three years ago, you would not see a local writer going nowhere near the genre. If I am not mistaken, Oliviu Crâznic took the plunge with his gothic novel “…and at the end remained the nightmare” in 2010, but other than that the publications have been sporadic. The same Oliviu Crâznic put together a gothic anthology, the first such collection of Romanian horror short stories I am aware of, “Beyond the Night. 12 Faces of the Gothic”, and now a second one saw the light of day, Mircea Pricăjan’s “Zombies: The Book of the Living Dead”.

I had the pleasure and honor to be invited at the launch of “Zombies: The Book of the Living Dead” and talk a bit about this anthology and as I said at the time I am not much of the fan of zombie fiction, but I am thrilled to see a Romanian zombie anthology. I personally find the zombie element overused and exhausted and it is a bit tiresome to see so many anthologies and novels published each year with nothing new brought to the genre. However, despite my reluctance toward this sub-genre and even before reading “Zombies: The Book of the Living Dead” my curiosity was picked by the possibilities offered by the local particularities and writers that could actually bring something fresh to this genre. With all the honesty I have to say that all of my expectations were surpassed. It is true that I could more easily relate to the Romanian locations, traditions and uniqueness that are common for all the stories of the collection, besides the zombie element, of course. But that isn’t the most impressive feat of “Zombies: The Book of the Living Dead”. Impressive is that each story offers something new, the characters are the ones that take the central stage and zombies are part of the props and setting enhancing the story without becoming the bothersome and stereotypical element of so many other stories of the sub-genre. In this aspect the anthology reminded me of Alden Bell’s “The Reapers are the Angels”, a zombie novel but where the story of life is more important than the element of the living dead. Here is the table of contents of Mircea Pricăjan’s “Zombies: The Book of the Living Dead”, with the hope that I’ll be able to put my thoughts in a proper review of the anthology sooner than later. 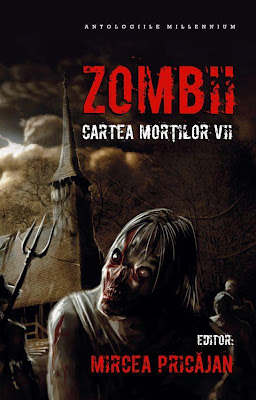 “Foreword” by Mircea Pricăjan
“An ordinary day after the end of the world” by Laura Sorin
“The moon always sets into the sea” by Răzvan T. Coloja
“Good night, Mihai!” by Ioana Vişan
“Hundres of small hearts like hundreds of suns caught beneath the earth” by A.R. Deleanu
“Coming from the volcanoes” by Tudor Călin Zarojanui
“Close to Antonio” by Narcisa Stoica
“Like mongooses in a Pacific Ocean island...” by Liviu Radu
“In week-end you are never alone” by Cristina Nemerovschi
“Back into death” by Oliviu Crâznic
“The Graves” by Florian Nan
“Len, who petrifies the evil” by Antuza Genescu
“Apocalypse after Romanians” by Florin Irimia
“The harvesting” by George Lazăr
“The hunger” by Laura Sorin
“The Dacian winter” by Tiberiu-Virgil Popescu
“The apprentice” by Ciprian Mitoceanu
“In a cheap novel her name would have been Mary” by Roxana Brînceanu
“Something written by Cousin Ina” by Andrei Gaceff
“Father and son” by Felix Tzele
“Infested” by Diana Alzner 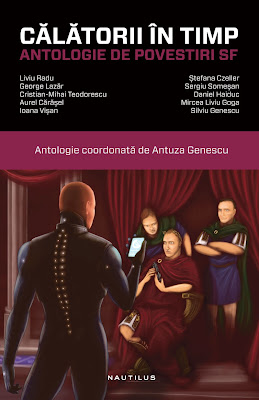 If horror is the poor relative of the Romanian speculative fiction, science fiction is definitely in command. Even in the restrictive years of the Communist regime science fiction fared better than fantasy and horror. One of the promoters of the modern local science fiction short stories is SRSFF (The Romanian Society of Science Fiction and Fantasy), which published three anthologies so far, “Other shores” in 2009, “Pangaea” in 2010 and “Venus” in 2011. This year SRSFF together with Nemira Publishing House released a new science fiction anthology, “Time Travels”, edited by Antuza Genescu. However, as much as it pleases me to see such an anthology being printed I cannot remark the abominable cover of this collection. I don’t want to be mean, but I believe that Nemira Publishing House needs to put more effort when it comes to the book covers of their speculative fiction collection. It feels like they are trying to chase away the readers from these titles not to allure them towards them. The potential is there, Nemira publishes in new wonderful editions the novels of the lady of Romanian crime fiction, Rodica Ojog-Brașoveanu, and the covers of these books have appeal. They are not masterpieces, but neither are they any match for those of the speculative fiction collection. But enough of that, I’ll avert my eyes and go straight to the table of contents, which is far more important.

“Between sky and earth...” by Liviu Radu
“Cronogenesis” by George Lazăr
“Transparent and superconductor” by Cristian-Mihail Teodorescu
“The Omega Factor” by Aurel Cărăşel
“Rendez-vous point at +3000” by Ioana Vişan
“Paris, 1941...” by Ştefana Czeller
“The last reportage” by Sergiu Someşan
“Morning with interferences” by Daniel Haiduc
“The lost nation” by Mircea Liviu Goga
“The zero incident” by Silviu Genescu
Posted by Mihai A. at 1:15 PM