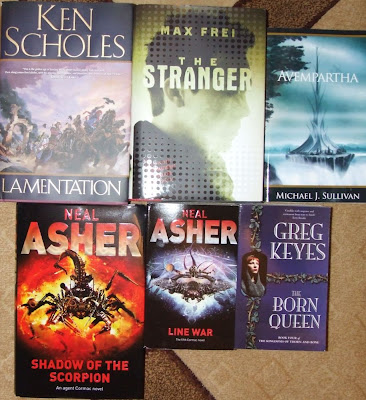 Avempartha has a very interesting cover...and i guess that all the books are interesting additions to your collection :)

The whole Kingdoms of Thorn and Bone series by Greg Keyes is on my shelf - unfortunately unread like a lot of other books. Lamentation and Avempartha are on my list.

There is a lot of hype around The Stranger by Max Frei. I read the German edition some years ago and for me the book didn't work. The blurb promises things which you never find in the book. For me this book was boring and disappointing like Jonathan Strange and Mr. Norrell by Susanna Clarke.

Agreed about The Stranger with ediFanoB; I guess it's a matter of taste - I see the book's appeal, but I read much more interesting (for me) similar books

I have a real soft spot for Michael Sullivan series - just loved Crown Conspiracy,it was a fun adventure and almost a standalone, but here in Avempartha things get deeper, it's in a way the true beginning of the series ending with the usual "To be continued" and I am really looking forward to book 3. This I will label from now as "personal favorite" just because I saw some people not liking its style - so wanna make sure people know this series I *just* love regardless of criticisms that I may agree or disagree with.

Lamentation had great promise but the characters were just boring for me; still I am interested in book 2, maybe with different character emphasis it will work better

Neal Asher - read and loved all his books, but Gridlinked is the place to start and then finish 5 novels later at Line War for the Cormac sequence; Shadow is a prequel that's ok, but not the best starting point, more a novella that works better as an interlude in between the big novels

My review of Nights comes up next week - did it a long time ago when I finished the book and just loved it - hopefully a final edited draft of book 2 will get in my inbox sooner rather than later :)

Bogdan, indeed they are. And I definitely have to look for some more space for my books :)

Michael, I haven't read Greg Keyes' series either. But this is a good reason to start it :)

Liviu, I am with you at Michael Sullivan's series. "The Crown Conspiracy" was fun and entertaining and I like it a lot. I am looking forward to "Avempartha" and the next ones as well.
I read a lot of mixed opinions about "The Stranger" and that makes me even more curious. I have to see where I stand with this novel.
And it looks that "Nights of Villjamur" has another positive review :)

Mihai,
there is always a good reason to start with a series :>)
I will think about it as soon as I have finished the Mistborn trilogy by Brandon Sanderson.

The Kingdoms of Thorne and Bone, was so well done by Keyes it's really a great entry in the Epic Fantasy Pantheon. I'd suggest anyone who hasn't picked it up do so. And if I hear one person calling it George Martin Lite, well I'm going to...well I probably won't do anything but I'll be annoyed.

In any case, looks like you've got your work cut out for you! Better get reading!

Harrison, I definitely have to look at Greg Keyes' series now. And indeed I have quite some reading to do :)

With the way the publishing and newspaper industries are going, sites like this and Fantasy Book Critic, may find themselves the only resource for thorough and fair reviews by individuals who take their subject seriously, and I am very pleased to think that I can count two of you as fans of my work.

Mr. Suciu is correct when he has stated that I am published through a very small firm that lacks the influence, resources, or capital to operate a powerful marketing campaign—they lack the resources to mount any campaign at all beyond a few bookstore signings. This leaves me with the burden of getting the word out myself. I am a writer of fiction, not a salesman. Luckily, I have been blessed with a wife of indomitable virtue who believes enough in my books to take on their marketing as a second full-time job. Yet despite her herculean efforts, my novels will never be a success unless reviewers and readers care enough to spread the word.

So while I try to refrain from making any comments at all where reviewers are concerned, as I feel it is inappropriate, and if anything—a hindrance, I do want you to know how much I appreciate your willingness to give equal time to us little guys. (Which is why I won’t be commenting on Dark Wolf’s review of Avempartha, except to say—thank you for reviewing it at all, regardless of the ultimate verdict.)

Michael, thank you very much for your comment. Indeed is a bit hard for the smaller publishers to get the word out, but they deserve to have our attention too, because we can find gems there as well. I was very happy to discover your book and I am happy to promote anyway I can.
And we are very lucky, my wife helps and supports me a lot, and I know that Robin does a great job and is a wonderful lady :)