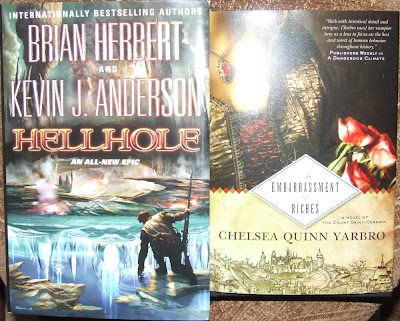 Two new books arrived this week in my mailbox, one a new collaboration between Kevin J. Anderson and Brian Herbert and a new novel by Chelsea Quinn Yarbro. I have to admit that “Hellhole” sounds really interesting and I am very curious about it. On the other hand, “An Embarrassment of Riches” is the 24th novel in the author’s “Saint Germain” series, but I am not sure about it. It is true that my previous experience with Chelsea Quinn Yarbro, “Beastnights”, was a very pleasant one, but here the vampire theme is not exactly appealing. Therefore I am not yet entirely sure if I pick the novel for a reading soon.
- "Hellhole" by Kevin J. Anderson and Brian Herbert (through the courtesy of Tor Books);
Only the most desperate colonists dare to make a new home on Hellhole. Reeling from a recent asteroid impact, tortured with horrific storms, tornadoes, hurricanes, earthquakes, and churning volcanic eruptions, the planet is a dumping ground for undesirables, misfits, and charlatans…but also a haven for dreamers and independent pioneers.
Against all odds, an exiled general named Adolphus has turned Hellhole into a place of real opportunity for the desperate colonists who call the planet their home. While the colonists are hard at work developing the planet, General Adolphus secretly builds alliances with the leaders of the other Deep Zone worlds, forming a clandestine coalition against the tyrannical, fossilized government responsible for their exile.
What no one knows is this: the planet Hellhole, though damaged and volatile, hides an amazing secret. Deep beneath its surface lies the remnants of an obliterated alien civilization and the buried memories of its unrecorded past that, when unearthed, could tear the galaxy apart.
- "An Embarrassment of Riches" by Chelsea Quinn Yarbro (through the courtesy of Tor Books).
More than two decades strong, the Saint-Germain cycle is one of the most compelling works of dark fantasy and horror of our age. Historically accurate, often involving key events or figures from throughout world history, these deeply emotional novels have a devoted readership. Each novel is written as a stand-alone and they are not chronologically consecutive, so readers may enter the saga with any book and move backward or forward in time as they choose, from Pharaonic Egypt to Paris in the 1700s, from the fall of the Roman Empire to World War II Europe.
In An Embarrassment of Riches, the vampire Count finds himself a virtual prisoner in the Court of Kunigunde in Bohemia in the 1200s. Rakoczy Ferncsi, as Saint-Germain is known, passes his days making jewels to delight Queen Kunigunde and trying not to become involved in the Court's intrigues. In this, the vampire fails. Handsome, apparently wealthy, and obviously unmarried, he soon finds himself being sexually blackmailed by Rozsa, an ambitious lady-in-waiting. If he does not satisfy her, she will denounce him to the priests and he'll be burned at the stake, resulting in his True Death. Despite his care, the vampire makes more than one enemy at the Bohemian Court, and by the end of An Embarrassment of Riches, the Count can see only one road to freedom...through death.
Thank you very much!
Posted by Mihai A. at 1:00 PM

Hi Mihai, I read Hellhole recently.
It is an entertaining classic space opera. I liked it except the third quarter which has been too predictable from my point of view.
This is the first book in a series and I will definitely read the next book.

I am very curious about this title, because it sounds really good. I hope to get to it soon :)