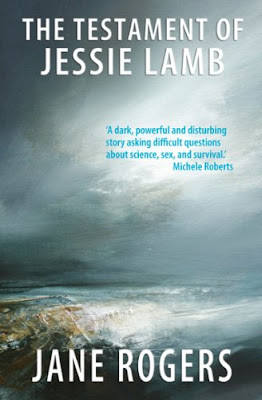 This year the Arthur C. Clarke Award was very much surrounded by debate, controversy and many days of more or less furious comments following the acid and critical but to the point opinion of Christopher Priest regarding the award shortlist of nominees and the judges of this science fiction award. It is undeniably that Christopher Priest made the 2012 edition of the Arthur C. Clarke Award more interesting and brought further and new attention to the awards ceremony. The winner of the 2012 Arthur C. Clarke Award is “The Testament of Jessie Lamb” by Jane Rogers. This is a very interesting choice, not only because it is the title from the awards shortlist that Christopher Priest saw as the deserving winner, but also because Jane Rogers’ “The Testament of Jessie Lamb” was on the longlist of 2011 the Man Booker Prize and because of the story behind its publication.

Jane Rogers is a respected writer of historical and literary fiction, but that didn’t help to easily bring on the market her first venture into the speculative fiction, “The Testament of Jessie Lamb”. The novel was rejected by all major and trade publishers and only found a home at Sandstone Press, a small publishing house from Scotland. All these aspects made me think of a couple of other things as well. Is speculative fiction still disregarded despite its latest growth in quality? From the refusal of the major publishers to release Jane Rogers’ “The Testament of Jessie Lamb” it seems that it still is, although the novel’s presence on the Man Booker Prize’s longlist might contradict this. Are the publishers afraid of innovation? Again from the difficulties of Jane Rogers to find a home for “The Testament of Jessie Lamb”, because it was a shift in her choice of genre, seem to give an affirmative answer to the question. My little experience on the matter confirms it too. It is a sad reality, but all the same very true. I am perfectly aware the security that comfort zone can offer, but stepping over boundaries and leaving a safe area behind, as hard as it is, can bring excellent things more often than not. It is the case with Jane Rogers’ “The Testament of Jessie Lamb”, a novel that gathered plenty of recognition for itself, despite the obstacles it had to surpass before it was published.

Whatever the future holds and what answers my questions would receive it is only fitting now to congratulate Jane Rogers for the 2012 Arthur C. Clarke Award!
Posted by Mihai A. at 1:01 PM