Romanian speculative fiction - "Beyond the Night. 12 Faces of the Gothic" edited by Oliviu Crâznic 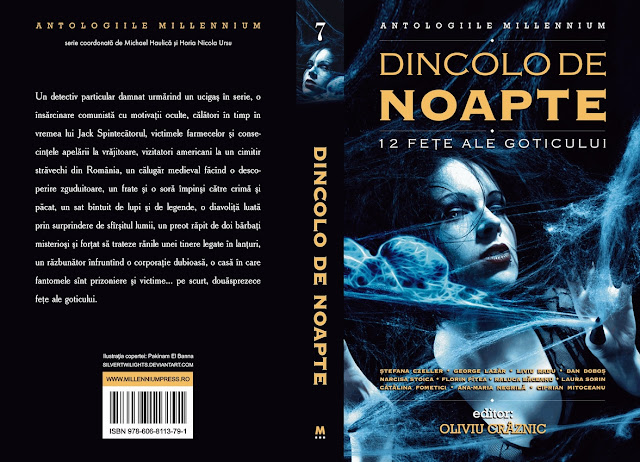 On the Romanian literature scene speculative fiction is seen rather as the poor relative than anything else. And going further deep horror fiction can barely receive the falling crumbs from the table. I am not aware of a Romanian author that can be defined in the full sense as a horror writer. The most recent attempt within the Romanian horror fiction was made by Oliviu Crâznic with the gothic novel “…and at the end remained the nightmare”, which was well received by the local speculative fiction community, but that is a pretty isolated event. This summer the Romanian speculative fiction scene in general and the horror genre in particular will be enriched with a new volume, an anthology of gothic fiction edited by Oliviu Crâznic, “Beyond the Night. 12 Faces of the Gothic” (Dincolo de noapte. 12 Fețe al goticului). The anthology gathers some of the heavy names of the Romanian speculative fiction, such as Liviu Radu, Dan Doboș or Florin Pîtea, but also new and emerging talents of the same scene. “Beyond the Night. 12 Faces of the Gothic” is due to be released by Millennium Press on June, 2nd at the National Book Fair Bookfest in the presence of the authors.

A doomed private detective on the trail of a serial killer, a communist assignment with occult motivations, time travelers in Jack the Ripper’s era, the victims of the charms and the consequences of resorting to witchcraft, American guests at a Romanian ancient cemetery, a medieval monk making a shocking discovery, a brother and a sister pushed towards crime and sin, a village haunted by wolves and legends, a she-devil surprised by the end of the world, a priest kidnapped by two mysterious men and forced to heal the wounds of a chained young woman, an avenger challenging a dubious corporation, a house in which ghosts are prisoners and victims… on the short, 12 FACES OF THE GOTHIC.

I am looking forward to grab a copy of this anthology and see what Romanian horror can produce.
Posted by Mihai A. at 1:00 PM

We are all thanking you very much for the post, and also I want to personally thank you for mentioning my Nightmare as being well received.
It would be allright for you to post your article on my blog also, specifying the source with a link? Maybe after a few days? Please let me know if you agree.
Respectfully,
Oliviu Craznic

Oliviu, thank you very much for your comment. I hope to attend the launch of the anthology or at least to come to Bookfest for a day. I am not sure yet, but anyway, I am looking forward to read your anthology.
As for the post you can put it on your blog too, with the source link, no problem :)

Great news, Mihai, I am looking forward to meet you! (As I have already stated in older posts, I do respect and appreciate very much your activity, though I do not have always the same opinions:)
And thank you for allowing me to use your post:), you are very kind.
Best wishes!