Ellen Datlow is one of the best editors of speculative fiction, her anthologies come at the highest of standards and her annual year’s best are among the most concentrated collections of excellent fiction. Now Ellen Datlow teams up with one of the most original and notable publishers of dark fiction, ChiZine Publications, for an anthology project, “Fearful Symmetries”, due to be published in early 2014. Nothing surprising so far. However, the interesting thing comes from “Fearful Symmetries” taking its first step to publication as a Kickstarter campaign, campaign that runs until 10th of January. And since the project has already reached a quarter of its funding goal I have hopes that we would see Ellen Datlow’s “Fearful Symmetries” in print. 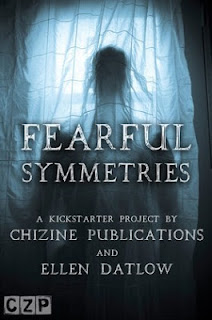 Ellen Datlow has announced the beginning of a Kickstarter campaign to fund a new horror anthology. Titled Fearful Symmetries, it will be published by ChiZine Publications in early 2014.

Given the rapidly changing publishing market, Datlow decided to turn to Kickstarter as an experiment to see if it could fund the project. The campaign will go toward the editing, layout, and production of the book, as well as offering professional rates to the authors. Datlow selected ChiZine Publications based on the quality of their books and distribution.

“This project is close to my heart,” says Datlow, “which is why I’ve decided to appeal to the public through Kickstarter. And while I have a stable of writers whose work I love, I want to give a chance to new talent that I may not be aware of. I want them to write the stories they’ve always wanted to and perhaps couldn’t because there was no venue for them.”

Unlike a lot of her anthologies, Fearful Symmetries will not have a theme. Datlow intends to solicit work from well-known horror writers, as well as those selected during an open reading period, something Datlow does not do often. If the campaign is a success, Fearful Symmetries will be released as a trade paperback and eBook, and is expected to be 125,000 words long.
Posted by Mihai A. at 1:16 PM