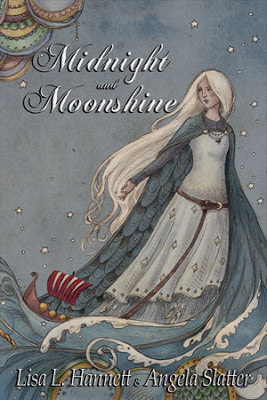 One of the best books I read last year, and not only, was the wonderful collaboration between Lisa L. Hannett and Angela Slatter, “Midnight and Moonshine”. Released by Ticonderoga Publications, this collection of short stories is a mix of Norse, Fae and new mythologies, engaging and beautifully written. It is over half a year later that I am still looking over my notes in an attempt to finally write the review of “Midnight and Moonshine” and fail miserably to start it once again, but until I manage to increase my efforts in writing my planned review I am happy to highlight the chance offered by Angela Slatter for one lucky reader to win a limited edition signed hardcover of her and Lisa L. Hannett’s “Midnight and Moonshine”. The competition is opened worldwide, its deadline is on June 21st and the full details of how you can enter are found on Angela Slatter’s site.

The gods are dead, but will not be forgotten.
When Mymnir flees the devastation of Ragnarok, she hopes to escape all that bound her to Ásgarðr — a heedless pantheon, a domineering brother, and her neglectful father-master, Óðinn. But the white raven, a being of memory and magic, should know that the past is not so easily left behind. No matter how far she flies, she cannot evade her family…
In planting seeds of the old world in the new, Mymnir becomes queen of a land with as many problems as the one she fled. Her long-lived Fae children ignite and fan feuds that span generations; lives are lost and loves won because of their tampering. Told in thirteen parts, Midnight and Moonshine follows the Beaufort and Laveaux families, part-human, part-Fae, as they battle, thrive and survive in Mymnir’s kingdom.
Midnight and Moonshine is a collection of interconnected tales with links between them as light and strong as spider-silk. From fire giants to whispering halls, disappearing children to evening-wolves, fairy hills to bewitched cypress trees, and talking heads to moonshiners of a special sort, Midnight and Moonshine takes readers on a journey from ninth century Vinland to America’s Deep South in the present day. Hannett and Slatter have created a mosaic novel of moments, story-tiles as strange as witchwood and withywindles.
Midnight and Moonshine is a rich tapestry of dark fantasy, fairy tale and speculation.
Posted by Mihai A. at 1:15 PM

I need to try to track down a copy of this. Referencing one of your most recent posts, I still buy books for cover art alone sometimes and I am a big fan of Kathleen Jennings' work. Great to hear that the book is lovely as well.

It is an awesome book, it works great with the cover art too. :)
I have quite a while now since I restrain myself from buying books solely for their covers. But I do have a folder full of beautiful book covers. It is the least I can do to satisfy my craving. ;)

I keep a folder on my desktop with covers I like too, as there is no way I can afford to buy many of the books I'd love to have because of the covers. Even if I had the money, I don't have the space.

Maybe if I win at lottery I could buy a castle in Scotland and have rooms for personal library and a gallery of such beautiful paintings. :)