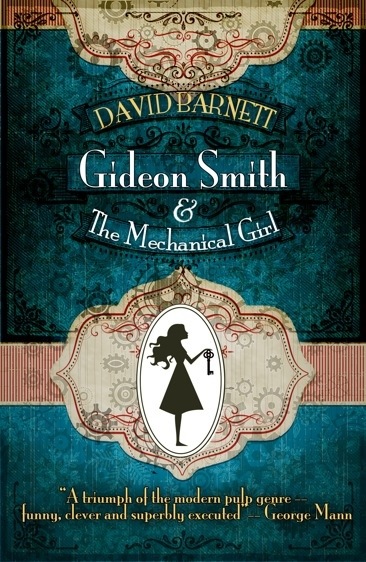 Steampunk never caught me. I am not sure if it is my tendency to go against most currents, unless they are fully on my taste and then I stop bitching about it and start swimming along them, or the association I make for this sub-genre with the works of Jules Verne, and those I raised on a pedestal I do not dare to touch. I read my small share of steampunk fiction, but these titles are not usually a priority for me. However, one such future book held my attention long enough to become very interested in reading it, David Barnett’s “Gideon Smith and the Mechanical Girl”. I could blame the cover for the UK edition of David Barnett’s upcoming novel, but that wouldn’t be entirely true. After all, I ceased the acquisitions of new books based solely on their cover artworks a long time ago. The main reason is David Barnett’s “Hinterland”, one of the novels I read in the past couple of years and failed to review properly, but one of those stories that get stuck forever to the reader. The premises of “Gideon Smith and the Mechanical Girl” are very interesting too, although “can a humble fisherman really become the true Hero of the Empire?” sounds a bit clichéd. I must admit though, that although the phrase looks too much as a cliché, the UK cover artwork did wonders in making me easily overlook it. It is a simple cover, but so much more efficient. There is enough tease behind the black figure of the girl and her key in order to complement the title successfully and both to make the book very appealing to me. The color tones are quite catchy as well. 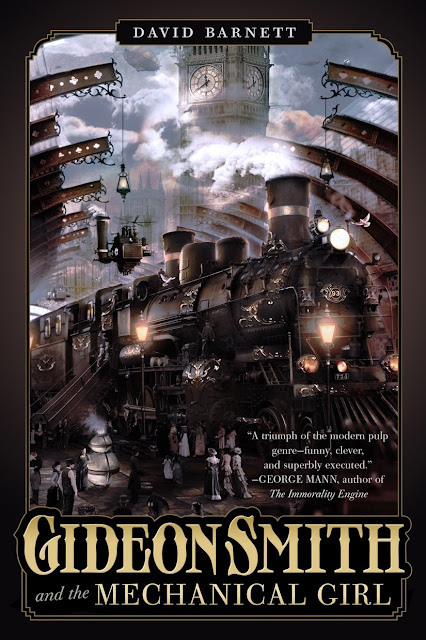 Now, there is also a cover for the US edition of David Barnett’s “Gideon Smith and the Mechanical Girl”, due to be released by Tor Books at the same time as the UK edition published by Snowbooks. It is not a bad cover, on the contrary, but for me it suffers in comparison with the UK one. And that is the reason I chose to talk about that one, it works a little better for me. But if you prefer the US cover you can give it a vote on David Barnett’s blog because he holds a cover smackdown between the two there. 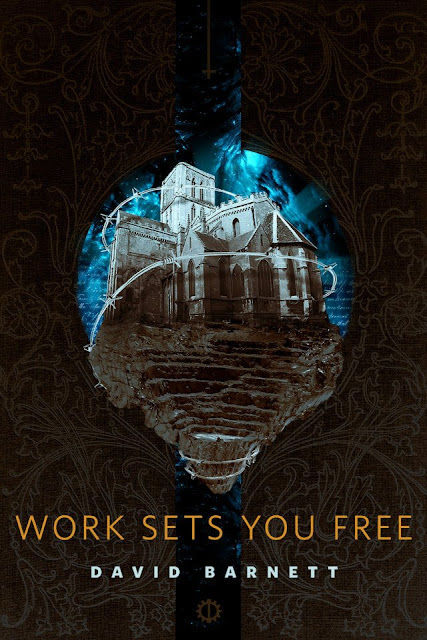 I might be on the side of the cover for the UK edition, but I cannot deny the pleasure it gives me to see another artwork made by Borja Fresco Nekro, the artist behind the US book cover, for a David Barnett short story set in the world of Gideon Smith. It is gorgeous, but I could hardly expect less from the art department of Tor.com! “Work Sets You Free” is due to be published on Tor.com and will be followed by a second tale in the same universe, “Business as Usual”, also on Tor.com. The first features Gideon Smith and an abbey with a dark secret run by gun-toting nuns, while the second shines a little light into the shadowy corners of the British Empire’s most secret service and its chief operative, the mysterious Mr. Walsingham.So, plenty of interesting things this summer and upcoming fall from David Barnett and his young hero, Gideon Smith.

In an alternative 1890, the British Empire’s reach and power is almost absolute, and from a technologically-advanced London where steam-power is king and airships ply the skies, Queen Victoria presides over three-quarters of the known world – including the east coast of America, following the failed revolution of 1775.
But London might as well be a world away from Sandsend, a tiny village on the Yorkshire coast, where Gideon Smith whiles away his days fishing on his father’s clockwork gearship and dreaming of the adventure promised him by the lurid tales of Captain Lucian Trigger, the Hero of the Empire, as presented in Gideon’s favourite “penny dreadful” periodical, World Marvels & Wonders.
When Gideon’s father is lost at sea in highly mysterious circumstances, Gideon is convinced that supernatural forces are at work. The writer Bram Stoker, holidaying in nearby Whitby, fears that a vampire from Transylvania is abroad on English soil, but is the dark agency that killed Arthur Smith and his crew even more ancient and foul – murderous, mummified creatures from the shifting sands of Egypt?
Deciding only Captain Lucian Trigger himself can aid him in his search for answers, Gideon sets off for London, and on the way rescues the mysterious mechanical girl Maria from a tumbledown house of shadows and iniquities.
Looking for heroes but finding only mysteries and unanswered questions, it falls to Gideon Smith to step up to the plate and attempt to save the day… but can a humble fisherman really become the true Hero of the Empire?
Posted by Mihai A. at 1:30 PM

I'm a big fan of the aesthetic of steampunk and while I've enjoyed the steampunk books I've read, I cannot say they are ever my first priority when it comes to choose what to read. My spoiling comes from reading James P. Blaylock, who was one of the first of this "modern" age of steampunk authors and whose Langdon St. Ives books are a favorite.

As for art, I'm torn but would probably go with you on this one for one reason: I don't see what the cover art on the U.S. edition has to do with the title. I love that image, being a big fan of old trains, but the more simple graphic design of the top UK one looks elegant and seems to fit the title better.

The art for the Tor.com short looks fantastic and I cannot wait to read it. I've been loving catching the short stories on Tor.com.

I never quite managed to get a grip of this sub-genre. While I enjoyed the steampunk books I read I cannot say that I had a memorable one.
I like old trains too, but the US cover is a bit too crowded for me. The set of location is there, the scale of the train makes it interesting, but still it needs more air for me. The UK cover is simple but it is also something very catchy.
Tor.com does an awesome job with both short stories and artwork. :)

I agree, the image is much too crowded. For me steampunk has to be a good story. If it is all about the trappings then I would rather just look at the art.

I've found Blaylock's stories to be good, but that is because to me they read like really good Sherlock Holmes mysteries.

And although it might be more accurately called "clockwork punk", I am really fond of Ekaterina Sedia's story, The Alchemy of Stone.

Carl, Ekaterina Sedia's "The Alchemy of Stone" is an awesome novel. One of my favorites of recent years. :)