One trend running on full speed lately in the speculative fiction is the Lovecraftian one. Myhtos, cosmic horror and forbidden knowledge are some of the themes of H.P. Lovecraft that inspired and influenced many new authors and editors in putting the basis of an entire sub-genre, Lovecraftian horror. Of course, the trend isn’t new but it is on the rise at the moment. However, unlike other trends, such as the zombie or vampire ones, Lovecraftian horror didn’t end on heavily beaten paths, managed to avoid becoming entirely stereotypical and brought into attention in the last few years some original stories and some very strong writers inspired by H.P. Lovecraft and his works.

One such new story comes from Spain, written by Jesús Cañadas, and it has a twist. “Los nombres muertos” (The Dead Names) not only has the familiar elements of the Lovecraftian fiction, but its main protagonist is H.P. Lovecraft himself. It isn’t the singular such apparition on its pages, along H.P. Lovecraft’s adventure in search of the Necronomicon he meets other mythical figures of speculative fiction such as Frank Belknap Long, Robert E. Howard, J.R.R. Tolkien, Arthur Machen or Aleister Crowley. “Los nombres muertos” is Jesús Cañadas’ second novel, after “El baile de los secretos” (The Dance of Secrets) published in 2011, and was released on October by Editorial Fantascy, an imprint of Random House Mondadori. And Jesús Cañadas’ “Los nombres muertos” (The Dead Names) doesn’t come only in a beautiful tome, with an evoking cover, but also with a very good book trailer. Not many book trailers can be as effective as a good book cover, usually I watch them long after I have already decided that I would like to buy and read that particular book and therefore these trailers rarely get a reaction from me. But over time I’ve seen a few that were very well made and stuck to my memory. Fortunately for Jesús Cañadas and his “Los nombre muertos” (The Dead Names) this is one such case, the book trailer is excellent, a very short film in itself that does wonders in stirring further my interest and desire to see what lies between the covers of this novel. 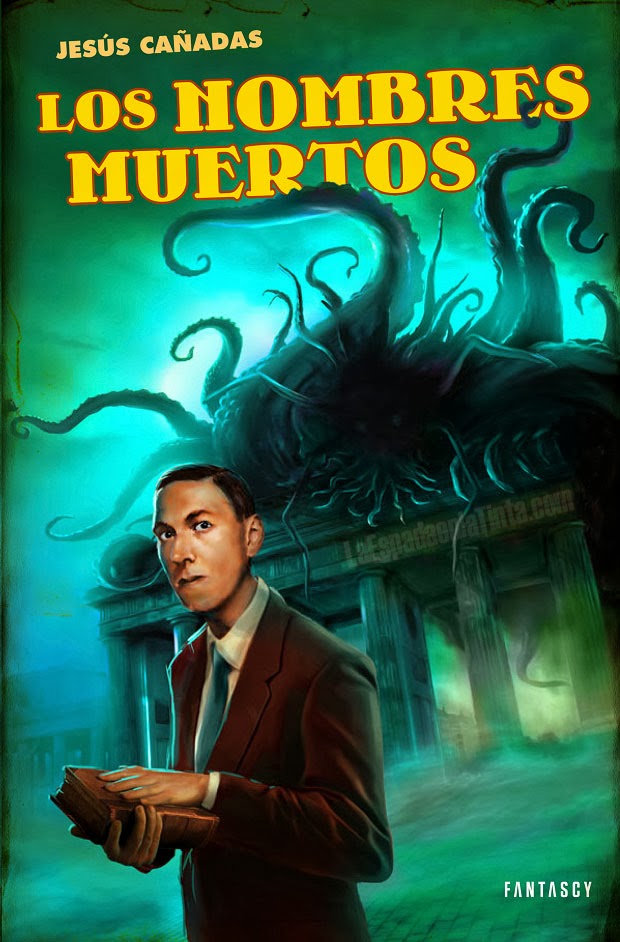 In 1919, the American writer Howard Phillips Lovecraft wrote the short story “The Hound”. On its pages was mentioned for the first time the Necronomicon, a grimoire of black magic surrounded by a sinister legend.
Twelve years later, the widow of a New York multimillionaire convinces H.P. Lovecraft to lead an expedition for finding the supposed cursed book.
Accompanied by the writers Frank Belknap Long (The Hounds of Tindalos) and Robert Erwin Howard (Conan), Lovecraft embarks on a quest from his natal Providence, to the dying Golden Dawn society in London or the interwar Berlin, passing by the Portuguese deadly cliffs or the ruins buried beneath the city of Damascus.
In the web of secrets that surrounds the Necronomicon, Lovecraft and his colleagues face deadly dangers, secret societies and forgotten cults prepared to kill in order to find the truth about of this book. His expedition becomes an exciting adventure in which he intersects with characters such as Aleister Crowley, Arthur Machen or a young J.R.R. Tolkien.

Jesús Cañadas recovers the mystery of the classic Weird Tales in a politically incorrect novel and with an end that nobody expects.

Jesús Cañadas was born in Cádiz in 1980. Always linked with the genre literature, his short stories were published in magazines such as Asimov Magazine, Lovecraft Magazine, Miasma or Aurora Bitzine; or in the anthologies “Visiones 2008” (Visions 2008), “Errores de Percepción” (Errors of Perception), “Calabazas en el Trastero” (Pumpkins in the Shed), “Ácronos”, “Fantasmagoría” or the recent “Charco Negro” (Black Puddle). In 2011 he published his first novel, “El baile de los secretos” (The Dance of Secrets), in the Excalibur collection of the Grupo AJEC publishing house, novel nominated for the Best Novel category of Scifiworld Awards. “Los nombres muertos” is his second novel. Tireless traveler, Jesús Cañadas lived in more than thirteen cities in the last ten years. Now he lives in Germany, where he combines the genre literature with his work at the Frankfurt Book Fair.
Posted by Mihai A. at 2:00 PM

Also, the book is really good. I really enjoyed it.

I've started too, but my Spanish still needs improving so I am going slow at the moment. And in this rhythm it might take a while to finish the novel too, but I am not giving up. Especially since I am enjoying it quite a lot. :)