"The Gate Theory" by Kaaron Warren 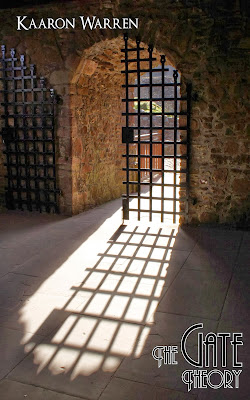 "The Gate Theory"
by Kaaron Warren
Publisher: Cohesion Press
The review is based on a bought copy of the book


These days there seems to be an avalanche of new books and it is very often that I find myself in difficulty catching up with all of those I want to read. And the situation becomes more desperate when the books I wish to read one more time are taken into consideration. Fortunately, things are easier for the short fiction, with the proper incentive I can put together more readily the time and energy necessary for a returning to my favorite stories and authors. The most recent opportunity to read again and enjoy one of my favorite writers was when the newly founded Cohesion Press published Kaaron Warren’s collection of reprinted stories, “The Gate Theory”. A collection of five stories, all familiar already, but what better excuse to relive their magic than this collection could I find?

“Purity” – Unsatisfied by her personal life and the medium she lives in Therese joins Calum and Daniel, an unusual preacher and his grandson. It is a story that touches firmly the bizarre, but with an adequate effect. Kaaron Warren is proficient in creating the atmosphere of religious hypnosis and the image of a strange cult leader and his followers. The end is unsettling and amplifies the impression of grotesque and strangeness.

“That Girl” – The story’s main character comes to Fiji backed by the funding of a wealthy Australian woman in an attempt to improve the conditions in St. Martin’s, a psychiatric institute. While there she discovers a local legend and the connection one of patients, Malvika, shares with it. The atmosphere of the story is excellently captured and built, the fragments of conversations, the local myths and superstitions are all elements that set the general feeling. Although it is basically a ghost story “That Girl” is just more than that, the reality of a particular corner of a society, Fiji and St. Martin’s in this instance, the cruel face of human behavior and the chilling elements of supernatural are mixed perfectly to inflict dread and to leave the reader with a bitter-sweet aftertaste after reading it.

“Dead Sea Fruit” – Among the patients of the story’s heroine, a dentist, are the girls hospitalized in the anorexics ward. But when the legend of Ash Mouth Man they circulate seems to come to life the main character has some decisions to make. “Dead Sea Fruit” is a story with an extended sense of surrealism, the characters and the readers walk in a dreamlike state, but also on the thin line between right or wrong, reality or fiction. However, no matter on which side of these thin lines the action will take its course there is naturalness to it. And although the story heads to an obvious destination, while the reader expects the evident to take place Kaaron Warren delivers a final twist surprising and effective as a punch in the stomach.

“The History Thief” – Alvin died choking with a piece of meat, but when he wakes up as a ghost still anchored to earth he starts to discover things he didn’t experience in life. Until he finally finds the courage to interact with Mrs. Moffat, a former co-worker.

“Three days Alvin lay on the floor of his dusty lounge room before he realized he was no longer anchored to his body. He rose, enjoying the sense of lightness but also feeling deeply sad at the sight of his small, lonely corpse.”

But as it becomes clear quite early in the story not only Alvin’s corpse is small and lonely, his entire existence was defined by insignificance and solitude, as much of a ghost in life as he is in death. Quite early too I became sympathetic with his character, the mix of Alvin’s memories and present state inflicts an air of melancholy and sadness to the story, sense that does not leave the reader until the end. On the contrary, it will be enhanced by the end. “The History Thief” grows gradually with all the new experiences Alvin has, stealing the thoughts and feelings of others, finding a certain meaning for his existence in death more than in life and getting the courage to finally do some of the things he wanted to do create the perfect medium for the final turn of the story. Although this final twist is not as stunning as the one of “Dead Sea Fruit”, it is as efficient and potent as the previous one. And despite the release some of the characters get in the end I could not shake the feeling of deep sadness this unforgettable story leaves behind.

“The Gaze Dogs of Nine Waterfalls” – Rosie McDonald has a talent for getting rare dog breeds to her clients, but when the latest order is for the vampire dogs of Fiji she might have to pay a price for them as well. Another story with a profound sense of surreal, again the reader walks the thin line between reality and imaginary. The story moves fast accentuating the feeling of vertigo inflicted by the surrealist atmosphere. It is a story with a powerful character at its center, a character that has to take fast and dramatic decisions, feels the need to prove herself in face of preconceptions and unjust consideration of her skills, but in the end the rewards remain to prove their worth.

The subjects and the characters of these five stories are haunting. They will not leave the reader indifferent, producing a change to certain extents, and that is always a sign of quality in fiction. The stories stay with the reader long after they are finished, the characters are all memorable. As a matter of fact, although they might not have a name or you might know them as Therese or Alvin or even present themselves as Rosie McDonald but always they will feel real. They may very well be the stranger we pass on the street, the neighbor we salute on our way out or a family member. They are flawed and we might not like them a lot, some of them are selfish, some find interest in other people’s misery and tragedy, some seek an escape from their every day existence, some fortunes, some love, but every single one of them seem to be incarnated body and soul. So much so that the reader feels the need to look over the shoulder in case all these characters are in the same room. Or in the mirror in case the stories seem to talk a bit about ourselves.

At a first glance, the collection of these five stories seems to be disjointed, but “The Gate Theory” is a perfect example of Kaaron Warren’s accomplishment in converting different themes and subjects into dense and powerful fiction. Her stories have the tendency to insidiously crawl under the reader’s skin, slithering unnoticed until they find a place from where one is unable to shake them loose after reading.
Posted by Mihai A. at 1:00 PM