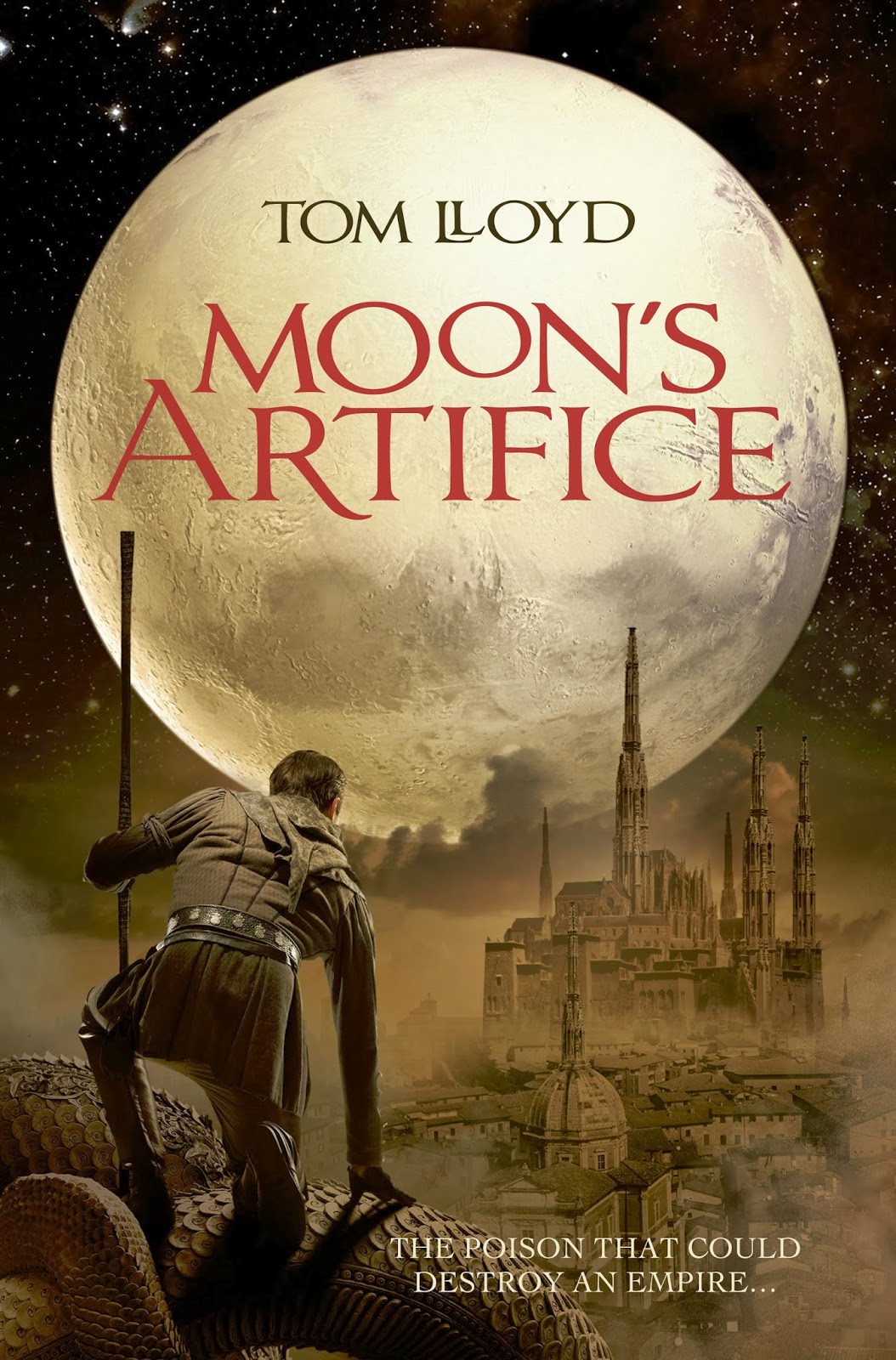 "Moon's Artifice"
by Tom Lloyd
Publisher: Gollancz
Review copy receive through the courtesy of the publisher


In a quiet corner of the Imperial City, Investigator Narin discovers the result of his first potentially lethal mistake. Minutes later he makes a second.

After an unremarkable career Narin finally has the chance of promotion to the hallowed ranks of the Lawbringers - guardians of the Emperor's laws and bastions for justice in a world of brutal expediency. Joining that honoured body would be the culmination of a lifelong dream, but it couldn't possibly have come at a worse time. A chance encounter drags Narin into a plot of gods and monsters, spies and assassins, accompanied by a grief-stricken young woman, an old man haunted by the ghosts of his past and an assassin with no past.

On the cusp of an industrial age that threatens the warrior caste's rule, the Empire of a Hundred Houses awaits civil war between noble factions. Centuries of conquest has made the empire a brittle and bloated monster; constrained by tradition and crying out for change. To save his own life and those of untold thousands Narin must understand the key to it all - Moon's Artifice, the poison that could destroy an empire.

Lately there seems to be a new trend on the rise, there are a couple of titles that mix the epic fantasy with the mystery genre, putting together their elements for new forms of plot and stories. And when sword and sorcery is thrown into the blend you can get a novel as Tom Lloyd’s “Moon’s Artifice” as a result.

In what seems to be a routine night Investigator Narin knocks unconscious an unknown, enigmatic man. Very soon after this event one of empire’s Gods enters into the scene and Narin finds himself with a mystery on his hands. Following a separate incident Kesh, a young woman with her life thrown upside down and threatened with death, is brought together with Narin, his friend Enchei and the enigmatic man, who discovers that his memory is wiped clean after the events of the night of his chanced encounter with Narin. The four of them are shortly on a mission of untangling the threads of the mystery at hand, but as they soon learn on a race against time for saving the people of Imperial City.

These four characters are also the main cast of the novel. Narin is an investigator within the empire’s law forces, a commoner with a promising career ahead of him, but also with a secret that could compromise it for good. Enchei is Narin’s friend and mentor, with fighting skills and prowess coming from a dark and secretive past. Kesh is a young woman with her existence twisted cruelly by latest events of her life, but whose qualities, feelings and resilience made her the best character of the novel for me. Irato, the mysterious man, is the heart of the mystery and the trigger that sends the domino tiles tumbling and scatters the pieces of the puzzle only to help putting them together. As I said, Kesh became quickly my favorite character of “Moon’s Artifice”, although her presence is not as important as Narin’s or Enchei’s she still seems to walk upon the morality’s grey shades more often than them and in spite of the fact that Narin and Enchei have dark secrets buried behind them, hidden things with the potential of making these characters ambiguous in terms of righteousness. These secrets, however, in the end, affect less the characters, have surprisingly little importance on the entire canvas of the novel and touch only slightly the general plot. It is only a small complaint, but I have to make considering the unfulfilled potential of this aspect of the story.

From the same little inconvenience suffer the side characters. Starting with Lawbringer Rhe, an almost god figure among the law forces of the Empire and mentor of Investigator Narin, to Synter, one of the negative characters, and Ayel Sorote, a member of the Imperial house holding interest in the matters at hand, they hold a promise that in the end is failed. The impeccable and immaculate Rhe manifests a very interesting internal conflict, capable of changing things around the law forces but also within the Empire, but this turmoil comes only at the end of the novel, when it’s too little too late. Synter is too much of a bad character, too much used to emphasize the negative aspects of the opposing side despite that she is one of the characters keeping the things engaging. Ayel Sorote is even more disappointing from my point of view. Another appearance shrouded in secrecy (although he is the author of the chapter entries revealing the history of the empire, so one could guess his occupation to a certain extent) he holds the potential of bringing the political games and intrigue into play and that with have for certain added more spice to the plot. But in the end he proves to be just a means to an end, especially when this entire possibility of intricate political game is thrown to the side by an interest in the city’s well being, an unanticipated path considering the efforts Ayel Sorote made in keeping himself as indecipherable as possible.

“I will help you, Master Narin,’ he said, ‘if for nothing else than to try and keep this city from catastrophe.”

Of course, since a second novel with the same characters and in the same world was recently announced it might be possible that my small complaints would be rendered void, but taking into consideration that “Moon’s Artifice” is a novel that can stand on itself I’ll keep them on their feet. What I’ll also keep standing tall is my admiration for the world within the events of the story take place. Confined to the walls of one city Tom Lloyd still creates the sense of a large setting, a wide world these characters inhabit. Imperial City, the heart of the empire, is a complex and wide settlement reflecting the way the empire is governed and the layout of its vast conquered lands. Each important house with an important role within the empire’s politics has a section of a city that reflects the features and characteristics of their home land. It is a fascinating cog in the novel’s world mechanism and I could almost picture the amalgam and complexity of such a city. Add to all these the Docks or Coldcliffs, for example, as some kind of neutral ground and it will result a truly imaginative setting.

The complexity of the empire and of Imperial City is reflected in the society’s hierarchy and the social stratification of its inhabitants. It is a world where the personal heritage is hard to escape, the lineage, position and occupation being clearly stated through tattoos made on each person’s skin, even if they are allowed or not to use guns can state a position within the society. But that is not the singular element that keeps the social classification in a status quo, each caste contributes to the situation by the fierceness with which it guards its group indifferent of their position, be that of nobles, imperial servants or barge drivers. The religious aspects are as elaborate as the empire’s geography, city’s pattern or caste organization. The ruling family built the Empire of a Hundred Houses on the bones of an older one and the Imperial City on the ruins of a previous one. At some point in the history of the empire a secret of the previous civilization was unearthed, the Emperor and Empresses discovered the secret of godhood and in time ascended to the heavens.

“Narin had to remind himself that all of the Gods had once been mortal men and women. In the earliest days of the Empire a king and queen had found the secret of immortality and ascended into the heavens. Exctly how they did so remained the greatest mystery the Empire had to offer, but their closest cadre of advisers had joined them in the years to follow. Over the next centuries that passed others has also been granted their own divine constellations by the Gods, after achieving enlightenment through the perfection of some art or skill.”

The old deities still manifest themselves, demons roam the city and the new gods keep an eye from above on the things running in the world. Almost all of them will also have a role to play in the conflict of the story, a plot derived from the religious aspects and the hunger for power. The mystery at the core of the novel is unraveled gradually with every piece of the puzzle coming nicely into place and keeping the reader entirely interested in the development and outcome of the story. There are no loose threads to hang around the plot, everything is wrapped nice and tightly. And the package comes with plenty of action scenes, fighting in small rooms and alleys, chases over streets and rooftops, underground ventures and daring rescues, sword and sorcery characteristics to make things even more exciting.

My only problem with long running fantasy series is that sometimes I catch sight of one that proves to be interesting to me when it reached its half-way through or two or three of its volumes are already published and in this situation getting up to date with the reading of a started series, more often than not, ends sacrificed in favor other books. As is the case for me with Tom Lloyd’s “Twilight Reign”, a series I became aware of after the release of “The Grave Thief”, but that was every single time left to the side because that was already its third volume. Therefore when Tom Lloyd’s new novel, “Moon’s Artifice”, independent of his series, was published I jumped on the occasion to finally discover his writing. And I was not in the least disappointed, the mix of epic fantasy, mystery and sword and sorcery is remarkably used to create a compelling and engaging reading.
Posted by Mihai A. at 1:31 PM

Hi Mihai,
I own the whole Twilight Reign series by Tom Lloyd but so far I did not manage to read more than the first books. So we have similar experience with this series.

Thank you for your excellent review of Moon's Artifice. I think you made the right decision to start with the new series. But with all Twilight Reign books sitting on my shelf, I decided for myself to finish this series first before picking up the new series by Tom Lloyd.

Michael, thank you very much. :)
I wanted to start "Twilight Reign" for quite some time now, but never got around to actually start reading it. But I also wanted to see how Tom Lloyd writes and I took the opportunity "Moon's Artifice" offered in that sense.