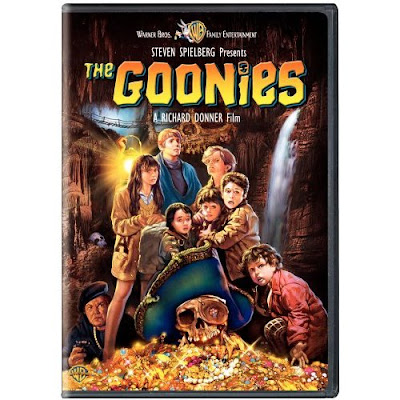 Being in a nostalgic mood after finishing "The Shadow of the Wind" I’ve decided that it was time to see again one of my favorite movies, one that relaxes me a great deal, "The Goonies".
A group of misfits children, nicknamed The Gooines, are spending some time together depressed by the upcoming turn of their community land in a golf course. They spend their time in Mikey Walsh’s house and while they rummage through the attic they find a treasure map. The map shows the way to the hidden treasure of a 17th century pirate, One-Eyed Willie. They see in this the opportunity to save their neighborhood and to help their parents to keep their houses. They start an adventure that involves a family of criminals, a scary looking fellow, underground passages and pirates.
The movie was released in 1985 but it seems ageless. It is a delight for the children of all ages and I know that I have one inside me. The movie shows the adventure of a bunch of kids, but it reminds me of all the childhood days when my biggest worry was what game to play next. And it reminds me of those days when me and my friends dreamed only at adventures, we dreamed being the heroes we read about or we saw in the movies. “The Goonies” is a statement for friendship, for innocence and for believing in what seem impossible dreams. Watching and enjoying this movie again reminded me of one quote from another classical one involving children and the innocence of childhood, “Stand by Me”:
“I never had any friends later on like the ones I had when I was twelve. Jesus, does anyone?”
Besides the adventure and the pace of the movie I really like the characters but one of them a little more, “Chunk”. He is a very funny character and I like his made up stories, I like his clumsiness and I loved the scene when the Fratellis threat to put his fingers in the mixer. Also his “truffle shuffle” is pretty amusing. I also love how Ma Fratelli, played by Anne Ramsey, hits her sons and I know that that hitting is a state of art further developed in “Throw Momma from the Train”.
I will always enjoy “The Goonies” and I know that it will always entertain the child in me and it will always cheer me up.
Posted by Mihai A. at 11:26 AM

Love The Goonies. I've got the old VHS version, which I've had since I was like 5 or something. Must have watched it 1000 times...

Ma Fratelli is such a great character. So many good moments in that film.

Wow; thanks for the memories. I wonder if I can find a copy for my daughter.

Tia, I hope your daughter will enjoy it as much as we do :)

Such a great flick. My favorite goonie is Sean Astin. He is smokin' hawt now. I'd hit it. I'd hit that hot piece of Goonie ass. That hot Hobbit shi*. I really would.

This is what I think: The Goonies