"Gardens of the Moon" by Steven Erikson 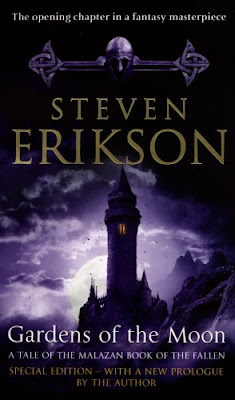 "Gardens of the Moon"
by Steven Erikson
Format: Paperback, 768 pages
Publisher: Bantam Press
The review is based on a bought copy of the novel
Bled dry by interminable warfare, infighting and bloody confrontations with Lord Anomander Rake and his Tiste Andii, the vast, sprawling Malazan empire simmers with discontent. Even its imperial legions yearn for some respite.
For Sergeant Whiskeyjack and his Bridgeburners and for Tattersail, sole surviving sorceress of the Second Legion, the aftermath of the siege of Pale should have been a time to mourn the dead. But Darujhistan, last of the Free Cities of Genabackis, still holds out – and Empress Lasseen’s ambition knows no bounds.
However, it seems the empire is not alone in this great game. Sinister forces gather as the gods themselves prepare to play their hand…
I have on my bookshelves all the Steven Erikson’s novels in the “Malazan Book the Fallen” series published so far, but always another title got priority in reading before the Malazan novels. Until now, when every other title was put on hold and I picked my copy of “Gardens of the Moon” for reading.
As soon as I opened “Gardens of the Moon” I was left wondering what made me delay the reading of Steven Erikson’s series so long, because with that first page a wide a door to a wide and impressive world was opened. There is not a single chapter in which the reader couldn’t feel the vastness of the world created by Steven Erikson. With intricate details, none of them left to chance, the world feels very much alive with a sense of reality close to perfection. There is nothing missing, a continent wrecked by war that gives only a small measure of a very large world, cities and regions that give consistency to this world, humans and a few other races that animate this world, an elaborated magic system that enriches the world and besides all these, pieces of history and myths that add the final touch of vividness to the entire structure.
Point and over again, because that is not all. There is the presence of gods as well, only a bit different from the usual existence. Like in the ancient mythology the gods from the “Gardens of the Moon” have a direct impact on the world, crossing the boundary between their realms and the world and weaving the threads of intrigue for a personal interest. Speaking of intrigue, it is necessary to say that the story is as complex as the world-building is, with a large game in play. On such a large game there are many players as well, each one following their own purpose, spying and conspiring. Not once the story looks like a chess game played with several sets of pieces, many of them playing for other players as well, on their own accord or against their wielder. But all of them for the delight of the reader.
Since the story involves so many players and factions there are many characters that populate Steven Erikson’s novel. And despite of the richness of their numbers all consist a strong presence, fulfilling successfully their roles and making the story very powerful. It is true that Steven Erikson doesn’t go too in depth with their characterization, but he goes enough and builds them through dialogues and actions. Further on, at any point in the story there is not a moment where the positive and negative characters are separated. More so, there aren’t any positive or negative characters, only plain, human ones acting according to their own beliefs.
Still, I don’t think that Steven Erikson’s “Gardens of the Moon” is for every reader, because the novel truly requires a lot of patience. For at least of the third of the novel the world, events and story are very confusing jumping from a point to another and a character to another in a way that places the reader in a state of vertigo. The magic system is a bit confusing too, because the spells are made through the access of Warrens and those although different are only slightly touched and are a bit hard to separate. Also I am not entirely sure how the system works and how the Warrens are accessed. I am certain though that all these things will continue to unfold until the final novel of the series and only then we will have the final picture of the world and story. Also, the pace is rather slow because although the novel concentrates on a military campaign “Gardens of the Moon” does this more through the politics and intrigue behind the campaign than through military actions. However, more than in any other reading the patience is heavily rewarded in the end, with a complex but beautiful novel in this case.
I am still wondering how did I start to read Steven Erikson’s series after so much time, but I am very happy that I finally did. And by the looks of it “Gardens of the Moon” is just an appetizer introducing the main courses to follow.
Posted by Mihai A. at 12:00 PM

I actually read this after book 2 in the series, which had (obviously) left me thoroughly confused. I was quite surprised to be none the wiser after going on to finish book 1 :)

I've still hung on and kept on reading them though!

Indeed there are many times when I felt confused, but in the end looking back over the reading it was rewarding. Still, I have some things unclear, but I believe that after finishing the series I will feel even more rewarded. Or at least I hope so :)