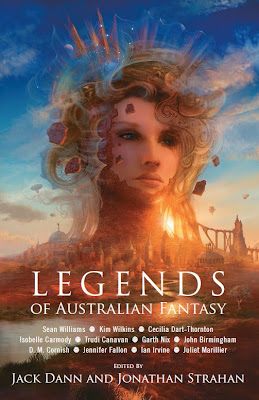 I’ve spotted this title on the Jonathan Strahan’s blog and this little discovery thrilled me. Not only because it is a fantasy anthology, but because it features Australian authors and it can help me get a better feeling of the Australian fantasy. The line-up features authors such as Garth Nix, Trudi Canavan, Sean Williams, Juliet Marillier or Jennifer Fallon and as I can see, many of the stories published in the anthology edited by Jack Dann and Jonathan Strahan are set in one of the authors’ series. “Legends of the Australian Fantasy” is due to be released in June 2010 by HarperCollins Australia.
- "Introduction: Homegrown Legends" - Jonathan Strahan and Jack Dann
- "To Hold the Bridge: An Old Kingdom Story" - Garth Nix
- "The Mad Apprentice: A Black Magician Story" - Trudi Canavan
- "’Twixt Firelight and Water: A Tale of Sevenwaters" - Juliet Marillier
- "The Dark Road: An Obernewtyn Story" - Isobelle Carmody
- "Crown of Rowan: A Tale of Thrysland" - Kim Wilkins
- "The Spark (A Romance in Four Acts): A Tale of the Change" - Sean Williams
- "The Corsers’ Hinge: A Lamplighter Tale" - D M Cornish
- "Tribute to Hell: A Tale of the Tainted Realm" - Ian Irvine
- "A Captain of the Gate" - John Birmingham
- "The Magic Word" - Jennifer Fallon
- "The Enchanted: A Tale of Erith" - Cecilia Dart-Thornton
- "About the Editors"
Posted by Mihai A. at 1:34 PM

Ooh this looks interesting, thanks for sharing. I lived in Melbourne - Australia for a year, and one of my best friends from school lives there still. So I'm always interested in what's happening "down under".

This anthology looks really good. There is a lot of srtong fantasy talent coming out of Australia/New Zealand and and this looks to be an excellent showcase for them.

Australia has some great voices in fantasy literature, so I am really interested in this title. I also interested in some novels published by HarperCollins Australia, but for now they are a bit hard to find for me. But I like to keep an eye on the fantasy scene from there :)

That cover is phenomenal. Wow.

Will it be available in the UK? I love Jennifer Fallon's stuff and her short story sounds amazing and so I desperately want to read it...Where will I be able to buy it?

I am not sure for the UK, but I've seen it on The Book Depository. And although the site says it is out of stock, I believe that is because it wasn't published yet. I set an email alert though so I can find out when it is available there.