"Blue and Gold" by K.J. Parker 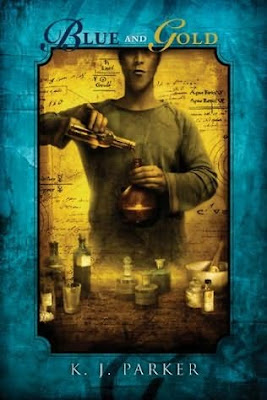 "Blue and Gold"
by K.J. Parker
Publisher: Subterranean Press
The review was initially posted on The Speculative Scotsman as a guest post
The review is based on a bought copy of the book

“Well, let me see,” I said, as the innkeeper poured me a beer. “In the morning I discovered the secret of changing base metal into gold. In the afternoon, I murdered my wife.”
For a man as remarkable as the philosopher Saloninus, just another day.
Of course, we only have his word for it, and Saloninus has been known to be creative with the truth. Little white lies are inevitable expedients when you’re one jump ahead of the secret police and on the brink of one of the greatest discoveries in the history of alchemy. But why would a scientist with the world’s most generous, forgiving patron be so desperate to run away? And what, if anything, has blue got to do with gold?

If I should name one of the most original and strong voices of modern fantasy fiction I would definitely choose without any hesitation K. J. Parker. The existence of K. J. Parker is shrouded in deep mystery, but the works published so far have been nothing but excellent. “Blue and Gold” is the second novella released by K. J. Parker after the wonderful “Purple and Black”.

As is the case with the K. J. Parker’s last works, the world of “Blue and Gold” is reminiscent of Byzantium or Roman civilization in the republic phase, but with plenty of personal touches for originality. And again K. J. Parker does not hit the reader on the head with excessive and bulky world-building, but unveils the setting with subtlety. The most striking details are the political and economical ones, strong factors that give the world solidity and stability. Even the smaller details in the political and economical cogs that spin the world of “Blue and Gold” are not left to chance, and carefully treated.

The story is told through the voice of Saloninus, a brilliant alchemist, found on the run after he is accused of his wife’s murder. Skillful, intelligent and witty, Saloninus is a very charismatic character with quite a story to be told and with a particular history behind him. I cannot place Saloninus among the positive characters of fiction, more appropriate for his definition is the Dungeons & Dragons alignment of chaotic neutral.

Nonetheless, Saloninus is one of the most likeable and memorable characters I encountered in my readings. And the manner in which Saloninus recollects his story is full of humor, quirky but attractive, and with enough charm to keep the reader glued to the tale until it is finished.

As a matter of fact, K. J. Parker’s entire novella is full of humor, sometimes sarcastic, sometimes friendly. It is in fact a step away from the majority of K. J. Parker’s novels: a radiant and entertaining read. Not that the other, darker works are not entertaining, but in a different manner and for different reasons. The plot is not overly complex, but beautifully constructed, with plenty of mystery and suspense to keep the reader guessing, until “Blue and Gold” is brought to a close... an end that although not surprising, is delightful and amusing.

K. J. Parker is one of the most underrated names in fantasy literature, although the works published so far are evidence enough of the contrary case. If it was necessary, “Blue and Gold” is another proof that certifies K. J. Parker’s originality and powerful voice. Definitely one of my all-time favorite writers.
Posted by Mihai A. at 1:00 PM

I love old K.J. Parker... I need to read the Engineer Trilogy, Sharps, and this Novella then I can say I've read all of his/her works! Still betting my buck that Parker is a man;)

K.J. Parker is always worth reading. I look forward to read Sharps.

I love K.J. Parker too and I read almost everything she (I believe K.J. Parker is a she ;D) wrote. I still to catch up with a couple of her novels but I can manage that very soon. "Sharps" included :)