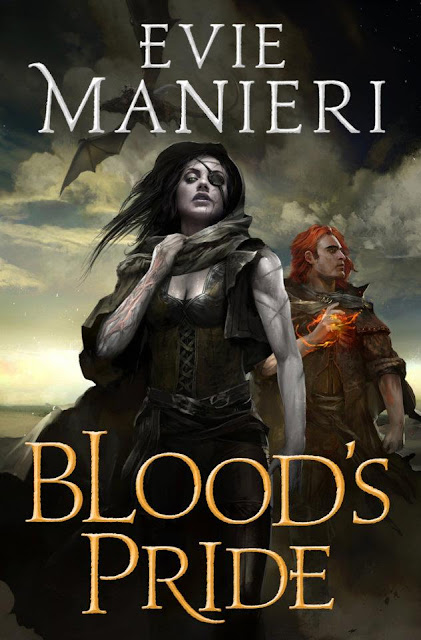 I’ve talked more than once about my reserve for characters featured on the book covers. I usually imagine the characters in one way and their presence on the book cover can influence the manner I picture them, rarely in a positive mode. I do not deny the beauty of such covers, but only occasionally I am fully satisfied by their appearance. One particular case is when I actually see the cover artwork after reading the book in question and one such situation is with Evie Manieri’s “Blood’s Pride”. I received an advance reading copy through the courtesy of the UK publisher, Jo Fletcher Books, and because of this I saw the cover artwork of the novel only after I finished reading “Blood’s Pride”. Ideal, but as much as I would love to see it happening more often (secretly dreaming of working in an art department) it is only occasionally possible. When I finally saw the cover edition for the UK edition of Evie Manieri’s novel I wasn’t thrilled. It is a nice cover, but not a spectacular one for me. My position changed when I discovered the cover artwork for the US edition, due to be released by Tor Books on February 2013. True, it is centered on characters and has a more pronounced accent on the fantasy theme, but it is another wonderful composition born from the magical hands of Kekai Kotaki. Evie Manieri’s “Blood’s Pride” has a large number of important characters and each of them could have made an appearance on the cover. But the two making that appearance are the ones that hold the thinnest of balances in the context of the story, the Mongrel and Jachad Nisharan. I did not picture these characters this way, Kekai Kotaki surpassed anything I imagined and he actually made me like the character of the Mongrel even more. Also, the darker atmosphere of the cover works better in my case. And in the end, as much as I feel restraint towards the characters featured on the book covers, in this case, I have to admit that the artwork is wonderful.
Posted by Mihai A. at 1:15 PM

Totally agree about this artwork being amazing... Makes me want to keep my eyes peeled for it.

A great artwork. Kekai Kotaki is one of the best modern artists.