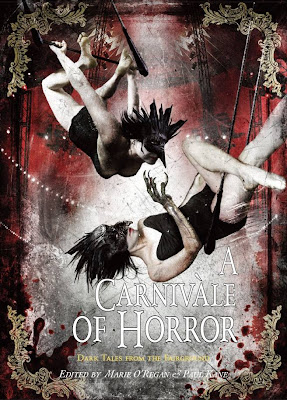 Last week, on 12th September, one of my anticipated anthologies, “Circus: Fantasy Under the Big Top” edited by Ekaterina Sedia, was released by Prime Books. As I said at the time of my “Circus: Fantasy Under the Big Top” discovery I do have my reservations towards the theme, but the editor and some of the contributors convinced me to give this particular collection a chance. On October, a similar collection will be available on the other side of the pond, edited by Marie O’Regan and Paul Kane and released by PS Publishing. Since I’ve already stated my reserve for the subject “A Carnivàle of Horror” might prove too much after Ekaterina Sedia’s anthology. But I can’t deny that Joe Hill, Andrew McKiernan (also contributor to “Circus: Fantasy Under the Big Top”), Alison Littlewood, Paul Finch, Robert Shearman and John Connolly, completed with the re-print of Ray Bradbury’s “Something Wicked This Way Comes”, are reasons enough for me to become interested in Marie O’Regan and Paul Kane’s anthology. With two such titles available in such a short period of time, I have only one more desire, for the circus theme not to be the next trend and to start assaulting the market with countless of similar titles. Fingers crossed!

The circus and fairground have long been associated as much with menace as they have with fun. Now, gathered together in one impressive volume from PS are some of the best examples of weird and horrific fiction from the big top.

“Introduction: Horror of the Carnivàle” by Marie O’Regan & Paul Kane
“Something Wicked This Way Comes” by Ray Bradbury
“A Flat Patch of Grass” by Muriel Gray
“Some Children Wander By Mistake” by John Connolly
“Spurs (AKA Freaks)” by Tod Robbins
“Tiger, Tiger” by Rio Youers
“Blind Voices” by Tom Reamy
“Mister Magister” by Thomas F. Monteleone
“Twittering From The Circus of The Dead” by Joe Hill
“The Pilo Family Circus” by Will Elliott
“Face of The Circus” by Lou Morgan
“Escardy Gap” by Peter Crowther & James Lovegrove
“The Circus of Dr Lao” by Charles Finney
“In The Forest of The Night” by Paul Finch
“All The Clowns in Clowntown” by Andrew McKiernan
“Nine Letters About Spit” by Robert Shearman
“To Run Away and Join The Circus” by Alison Littlewood
Posted by Mihai A. at 5:00 PM

I saw this one on Paul Finch's blog, and it really caught my eye. A very snazzy cover, and even snazzier ToC.

Very good cover, indeed! And the TOC looks great as well. It also seems that PS publishing have some very interesting titles coming out this fall :)