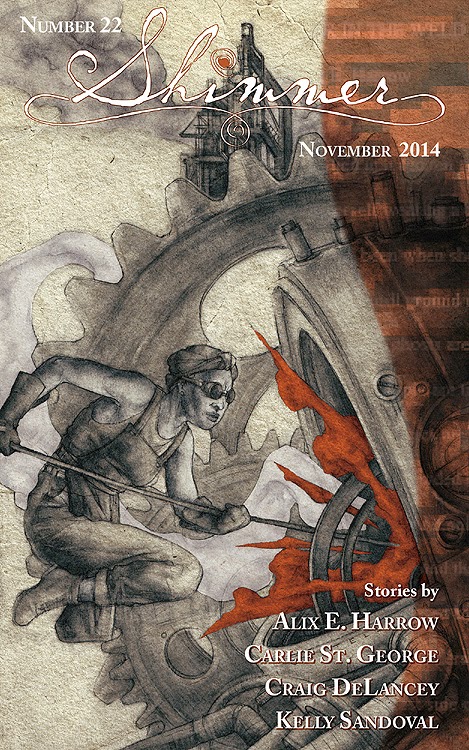 Shimmer Magazine
Issue 22, November 2014
The review is based on a bought copy of the magazine


“A Whisper in the Weld” by Alix E. Harrow – Isa Bell dies in an accident at the steel mill she is working, but her ghost lingers near her working place and her nearby home, waiting to meet with the ghost of her husband, supposedly recently killed in action, while keeping an eye of her daughters. In the simplest approach I could put Alix E. Harrow’s story in a line of other ghost stories, after all familiar elements of such tales make their presence felt, a cat is the only being capable of seeing Isa after her death and the connection her ghost has with Isa’s places of living and work, but “A Whisper in the Weld” is anything but a conventional ghost story. A story of love, loss and hope, with social implications heightened by the difficult times of war in which it is set. No statements of after life are made, there is no better place relieving the dead of the burdens carried in life, only a certain peacefulness and the characteristic course of nature.
“After death, ghosts are sculpted like cold clay into the shapes they wore when they were most alive. Some people are taken by surprise. Women whose lives were about their husbands and homes are, without warning, precisely as they were when they met a stranger’s eyes on a crowded streetcar. Men who had the kinds of careers that involved velvet-lined train cars and cigar smoke are suddenly nine years old, running their spectral fingers through the tall grasses and thinking of nothing at all.”
I am not trying to claim knowledge of the author’s intentions, I am not attempting to proclaim hindsight, but the names of Isa’s daughters, Vesta (from the Roman goddess of family, home and hearth) and Persephone (from the Greek queen of the underworld and goddess of vegetation), could be seen as a from of reflection of the bridge Isa Bell crosses from life to death.
Social issues are extensively treated, with all the unpleasant results emerging out of a society profiting to the maximum of dire times. The characters are handled broadly as well, even with the limited space offered by the short forms of fiction Alix E. Harrow creates strong protagonists, all of them, even if they have a more or less presence within the story, send waves of deep emotions across the pages. As it is the case with the language of “A Whisper in the Weld”, rich, beautiful prose enhances the reading experience of this wonderful story. Alix E. Harrow’s “A Whisper in the Weld” is one of those stories holding countless rewards with its lines, as precious as a rare gem.

“Caretaker” by Carlie St. George – The main character mysteriously receives the dead bodies of suicides and takes upon herself (the gender of the character isn’t stated but somehow I felt it is a woman) the mission of burying and offering them the final rest. It is a very short story and yet with such a great depth. Guided by the dream of the catcher in the rye of saving people before they fall from the cliff the main character feels pressured by the task she takes on herself, difficult and lonely most of the times, but committing to it with full responsibility. It is a world full of ghosts that surrounds her, be them stars, dead astral bodies in the sky, people walking in life as if they are ghosts or the specters of the departure ones who come to her in their final hour.

“Cantor’s Dragon” by Craig DeLancey – Georg Cantor, the renowned mathematician, is admitted into a clinic after the tragic death of his son and here he confronts a dragon that seems to be one of the keepers of after life. A touching, sensible story and another one of this issue that offers a certain image of what awaits beyond the threshold of death without the smugness of the beholders of universal truth. Georg Cantor work was on the theory of infinity and that is reflected in the image of “Cantor’s Dragon”. Heaven and hell is a matter of choice here instead of a reward or a threat and the possibilities are, well, infinite. The latter can be a matter of personal delusion and mental torment, since the dragon Cantor sees could well be the creation of his own mind. Reaching the former becomes a problem of mathematics and a contest of logics between Cantor and the dragon a form of gaining access to it. Yet, for me, Cantor’s clever solution doesn’t seem to bring relief, it only appears to highlight the tragedy at the core of this story.

“The One They Took Before” by Kelly Sandoval – Kayla, returned from the land of the fairies, where she was abducted, finds herself torn between their world and ours. “The One They Took Before” holds perfectly the feeling of main character’s anxiety, the craving for something she cannot reach, be that from our modern world or that of the fairies. Her inefficiency of readapting, her constant search for signs of the fairies, sometimes with hope, sometimes full of fear, back the credibility of Kayla’s situation throughout the entire story. As in the case of the first tale of this issue Kelly Sandoval’s “The One They Took Before” is also topped with beautiful, poetic prose.
“Witnesses report Aarons was seen outside the venue with a woman described as having skin the color of a summer moon and eyes as deep as madness.”

Shimmer’s 22nd issue comes with an assortment of stories full of loss, longing and despair, however not of the darkest, bleakest kind, but as melancholic as an early autumn rain. With this intricate issue Shimmer does once again what it does best, it presents stories that leave a mark on the reader and brings forth strong voices, talented writers to watch in the future.
Posted by Mihai A. at 12:20 PM