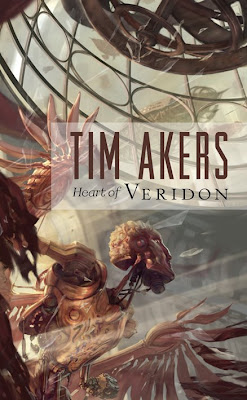 Although there are rumors and debates of the selling of Solaris imprint their title catalogue remains interesting, as always. And one the novels I am looking forward to read this year is the debut novel of Tim Akers, “Heart of Veridon”. The novel is scheduled to be released on August and it has an interesting teaser:
Heart of Veridon is the first book in the Burn Cycle. Jacob Burn is a disgraced airship pilot, and a man augmented by strange implants designed to keep him alive in combat conditions.
An exiled son of nobility, he now makes his own way in the criminal underworld of Veridon, the City of Cog. But soon Jacob finds himself caught in a conspiracy of sabotage and murder between the government and the church, a mystery that stretches back into the roots of the city of Veridon itself.
Lately I grew quite fond of the steampunk sub-genre and I am more and more interested in such titles. “Heart of Veridon” is one of these titles and caught my attention, besides the teaser and the genre it fits, with the cover art too. The artwork is made by the talented Jon Foster and renders a beautiful and catchy atmosphere. Although the information is a bit old already (it was posted on the Solaris blog, When Gravity Fails, on January), I discovered it, to my shame, only last week.
Posted by Mihai A. at 2:28 PM

Yeah this sounds like one I have to check out.

I'm glad you discovered the book because I missed it too. And I have a growing weakness for steampunk.The cover is awesome. Added book tomy list!

i wonder if he got his ideas from canadian author kenneth oppel and his successful airship series?

Hmm... An interesting being on the cover that reminded me of the mechanical Inevitables in D&D: http://www.wizards.com/dnd/images/MM35_gallery/MM35_PG158.jpg

sbp & Michael, it caught my eye as soon as I read the teaser :)

laughingwolf, I have to say that I am not familiar with Kenneth Oppel's works :)

Simon, you know your stuff when it comes to artwork of games :)

he writes ya stuff, but very well :)

Laughingwolf, I will have to check his works. Thank you for the recommendation :)

I hope you guys like the book! We're all still waiting to see how the Solaris thing shakes out, but the responses from the early readers has been very positive. I'm hoping to post some chapters online once we're closer to the pub date.

Tim, I am looking forward to read your book :)