"The Devil You Know" by Mike Carey 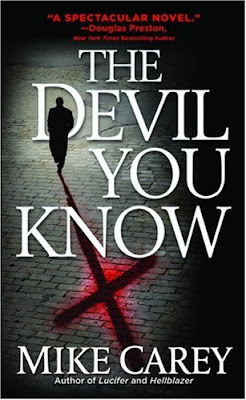 "The Devil You Know"
by Mike Carey
Format: Paperback, 528 pages
Publisher: Grand Central Publishing
Felix Castor is a freelance exorcist, and London is his stamping ground. It may seem like a good ghostbuster can charge what he likes and enjoy a hell of a lifestyle--but there's a risk: Sooner or later he's going to take on a spirit that's too strong for him. While trying to back out of this ill-conceived career, Castor accepts a seemingly simple ghost-hunting case at a museum in the shadowy heart of London--just to pay the bills, you understand. But what should have been a perfectly straightforward exorcism is rapidly turning into the Who Can Kill Castor First Show, with demons and ghosts all keen to claim the big prize. That's OK: Castor knows how to deal with the dead. It's the living who piss him off...
Mike Carey built himself a name in the comic books industry, being well known for his series “Hellblazer” and “Lucifer”, and “The Devil You Know” is his first step into the world of literature. Although the Felix Castor series, from which “The Devil You Know” is a part, will reach its 5th volume this year and despite his career in comics this novel is my first step into the works of Mike Carey.
My childhood dreams were haunted by great adventures and mysteries, constantly fueled by authors like Sir Arthur Conan Doyle, Agatha Christie, Georges Simenon or Dashiell Hammett and heroes like Sherlock Holmes, Hercule Poirot, Inspector Maigret or Sam Spade. Felix Castor, the hero of “The Devil You Know”, might not fall in the same category as these heroes (he is a freelance exorcist), but he reminded me with great pleasure of this heroes and he can successfully follow them in a timeline of investigators. But Felix Castor is unique and has characteristics that instantly made me like him. Besides his ability to see ghosts and his capability to exorcise them Felix proves to be an average human and sometimes displays a lack of luck that will not make anyone envious. I liked that Felix has his own issues to deal with, I liked how he questions his job and he doubts his abilities. What made me like him even more are his sense of auto-irony of humor, proved not only once throughout the dialogues of the novel. Felix Castor is a complex character and Mike Carey managed to create a personage who looks and sounds real, with his weaknesses and strengths.
Felix Castor investigates a case which involves paranormal aspects. Actually the whole world has paranormal aspects and is populated by paranormal presences, ghosts, zombies, demons or were-things. But Mike Carey doesn’t exaggerate on this aspects, he manages to build a wonderful binding between the real and paranormal life. The setting of this investigation is London and although the author doesn’t make detailed descriptions of the places present in the novel I could get a feeling of the great English city. And besides the setting and the main character the plot played an important role in the pleasure of my reading. With a perfectly balanced mix of action and rhythm the plot will seem to turn the pages on its own and the mystery will be drawn to the last chapters, but seasoned along the way with tension, humor, drama and twists and turns. I enjoyed the plot and the mystery a lot and I have to admit that although I had in mind something from the outcome it was only a small part of what I expected.
The secondary characters might not be as powerful as the main one and there are a few moments that seemed pointless in the general setting, but Mike Carey's “The Devil You Know” is what I am looking for in my readings. And like the novels written by the authors I mentioned at the beginning of my review “The Devil You Know” is a novel which with certainty I will re-read at least once more in the future. But until then I will enjoy meeting again Felix Castor in the next novels of his adventures.
Posted by Mihai A. at 10:49 AM

Adele, I really liked this book and since I didn't know what to expect I was pleasantly surprised.

This sounds like it be right up my alley with the paranormals. I prefer books that have a different ending than the one I come up with.

Barbara, although I expected some things it has some nice twists and turns along the way :)

Glad you got round to reading 'The Devil You Know' I'm hoping you'll pick up the next ones.

There is an underlying storyline that the secondary characters (well his friends/associates) are involved in from one book to the other to do with the demon inside Rabbi (that could be the wrong name).

It's a great series I think.

Yes, I am looking for the next novels too. I hope that that underlying story will develop because it is interesting.