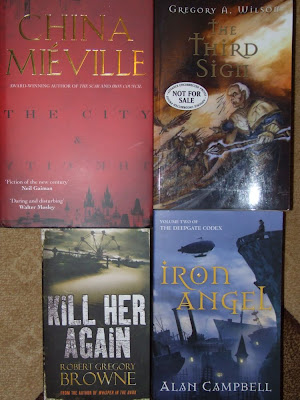 Here are the latest arrivals in my mailbox:
- "The City & The City" by China Miéville (through the courtesy of Pan Macmillan);
When the body of a murdered woman is found in the extraordinary, decaying city of Besźel, somewhere at the edge of Europe, it looks like a routine case for Inspector Tyador Borlú of the Extreme Crime Squad. But as he probes, the evidence begins to point to conspiracies far stranger, and more deadly, than anything he could have imagined. Soon his work puts him and those he cares for in danger. Borlú must travel to the only metropolis on Earth as strange as his own, across a border like no other.
With shades of Kafka and Philip K. Dick, Raymond Chandler and 1984 , The City & The City is a murder mystery taken to dazzling metaphysical and artistic heights.
- "Iron Angel" by Alan Campbell (through the courtesy of Pan Macmillan);
Order has collapsed in Deepgate. The chained city is now in ruins, and the Deadsands beyond are full of fleeing refugees. Meanwhile, the Spine militia is trying to halt the exodus of panicking citizens through brutal force. Rachel and the young angel Dill are dragged off to the Temple torture chambers . . . but strange things start to happen as a foul red mist rises from the abyss beneath the city. For the god Ulcis's death has left the gates to Hell unguarded, and certain forces in the fathomless darkness beneath Deepgate have noticed an opportunity.
Only the offspring of the dread goddess Ayen understand this new danger. Already, Cospinol, god of brine and fog, is coming to save his brother's temple -- and to hunt down Ulcis's murderers. His foul, fog-wreathed skyship has already reached Sandport, bringing along its own version of hell.
By now, Rachel just wants to keep her companion alive. Escaping their prison, and with enemies closing in on all sides, she is forced to undertake a perilous journey across the Deadsands towards the distant land of Pandemeria. But there the battlefield at Coreollis is fated to witness a clash of powers -- a contest between men and gods and archons and slaves, all forced into desperate alliances.
- "Kill Her Again" by Robert Gregory Browne (through the courtesy of Pan Macmillan);
FBI agent Anna McBride has reached a crisis point in her life. Disgraced and demoted after leading a disastrous operation in South San Francisco, she finds herself reassigned to one of the Bureau’s Southern California satellite offices, stuck with a partner who’s about as obnoxious as they come. But Anna is also battling demons of her own. Increasingly vivid and disturbing nightmares have begun to blur her judgement and interfere with her job. Nightmares of a little girl being kidnapped by a man who keeps appearing with a red cap. . .
When she seeks the help of hypnotherapist, Daniel Pope – a consultant on a case she’s currently investigating – a past life regression session suggests that Anna is the reincarnated victim of a notorious serial killer. Armed with this knowledge, and using clues found only in her nightmares, Anna circumvents Bureau rules and begins investigating a twenty-eight year-old case, hoping to find the killer of the girl who once harboured her soul . . .
- "The Third Sign" by Gregory A. Wilson (through the courtesy of Gregory A. Wilson).
Calen Gollnet lives in a tumultuous world. Surrounded by hostile forces bent on its destruction, his country Klune has been free for ten years, having thrown off the yoke of oppression thanks to a small group of heroes known as the Covenant; but the cost of this freedom was great, and the nation's liberty is becoming tenuous. The Covenant is broken, and Klune is now kept safe only because of a treaty struck between the human king and a race of honorable but xenophobic mercenaries known as arlics who have patrolled Klune's borders for the past decade. But the treaty is due to expire, and both the arlics and humans are restless, each claiming that they have been weakened by their dependence on the other.
As negotiations between the two sides break down and dark armies gather while politics bogs down the governors of city and country, Calen flees from the army attacking his home city, unaware that there is more to fear than mortal warriors; the appearance of the horrifying Soul Wall and other omens point to the fulfillment of the Prophecy of Return, in which it is said that three signs will signal the return of a great evil. The first two signs have come to pass, but the prophecy is obscure on its final prediction: the tide of the conflict may be changed by the third sign, but no one knows what that sign is, or whom it will favor.
The Third Sign is an epic fantasy, in the tradition of J.R.R. Tolkien and Robert Jordan, whose unique combination of suspense, mystery, political intrigue and sword and sorcery will draw readers in as they search with the characters for the answer to the most important question: what is The Third Sign?
Posted by Mihai A. at 12:50 PM

I can't wait to get into The City & The City, looks fab.

Oh, and I reviewed Kill her again and Iron Angel, looking forward to your views on it.

I'm really look forward to read The City & The City.

My review of City/City will come up next week (done, scheduled) but I was mixed; if you like modern mysteries/police procedurals you will love it;

The first part is superb, fresh, new and Mr. Mieville sells me "Emperor's New Clothes" on a million people scale so well, that I willingly suspended disbelief.

"The City & The City" is one of the titles I was looking forward to read this year. I am glad I got this copy, so I can check it out. I liked China Mieville's works so far, original and quite catchy so I am very curious :)

I just got The City and The City as well as China's Un Lun Dun used in HC, which I was very happy about.

I have the Romanian edition of "Un Lun Dun" :)