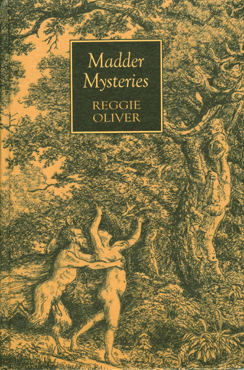 "Madder Mysteries"
by Reggie Oliver
Format: Hardcover, 256 pages
Publisher: Ex Occidente Press
As I mentioned in a previous post last November I saw in the hands of an acquaintance the first title released by a new small press, Ex Occidente Press, specialized in limited editions of “weird, strange, decadent and fantastic” stories. Since then the information was stored in the back of my mind until I picked up and read the new collection of stories written by Reggie Oliver, “Madder Mysteries”.
“Madder Mysteries” is the Reggie Oliver’s fourth collection of stories and one that doesn’t gather only short fiction. Structured in three sections the collection contains short fiction (“Stories”), essays about other authors supernatural stories (“Diversions & Curiosities”) and snippets written in the style of a nineteenth century magazine of strange events (“The Cabinet of Curiosities”).
“Baskerville’s Midgets” – A landlady who hosts actors in her house receives a troupe of midget performers. But her connection and affection with the midgets will reach a new limit. Reggie Oliver builds in this short story a weird and uncomfortable atmosphere through a few palpable situations, with a supernatural twist and a feeling of strange that can only be guessed. The story is peppered with moments of humor and irony.
“The Wig: A Monologue for an Actor” – An actor relates a story from his youth of a rivalry between two fellow actors. As the title says this story is a monologue in which the author’s experience as an actor shows itself. Also like in a play the body language of the storyteller is set between brackets, element that adds to the unease of the story recounting as well.
“Tawny” – At a Christening party a recollection of a past love will be interrupted by a brutal and horrific act. The story is in fact a dialogue, beautifully developed, with tension gathering between the lines until a horror act unfolds, act which remains untold but even more disturbing because of this.
“The Head” – A young taxi driver develops a working relationship with one of his clients, an art critic. However, fulfilling the final request of his client will bring him a strange fortune instead of the promised one. A tale of haunting in which Reggie Oliver manages to express the uneasiness of the protagonist in way in which I could almost feel it. Also the character’s annoyance toward the end of the story was almost in my immediate reach.
“The Devil’s Funeral” – The storyteller finds a series of letters and journal entries depicting an unfortunate and weird event from his grandfather’s youth. This is my favorite story of this collection. I love how Reggie Oliver plays with the historical elements of the story’s setting, how he builds an unsettling climate and how he mingles the terrifying reality with powerful and strange visions.
“A Donkey at the Mysteries” – Before starting his studies at Oxford a young man travels to Greece, where he will encounter a forgotten religion. The story is unveiled in an atmosphere of solitude, which combined with a strange worshipping will end up into an oppressive and obsessive situation.
“The Game of Bear” – Mr. Purdue finds himself haunted by the presence of his cousin who doesn’t want to leave his property. After her death he finds through her belongings a book of rhymes which speaks of heavy punishments to the wrongful ones. Reggie Oliver attempts to finish the M.R. James’ story and in my opinion he manages to complete it successfully. He manages to keep the same voice as M.R. James and to bring an end in the same style.
“The Devil’s Number” – Working on a library our storyteller discovers a few hidden pages written by Casanova in which he recounts his meeting with a strange figure and which leads to one of his life’s regrets. The weird sensation is kept from the beginning to the end of the story despite the period of time or location of it, unsettling the reader through hinted events.
“Diversions & Curiosities” section contains Reggie Oliver’s essays regarding the supernatural tales of Stella Gibbons, Montague Summers, M.R. James, Henry James and Jules Charnier. I found these essays entertaining, putting a light on these authors’ works and their approach on supernatural tales, describing some of these works and sharing his opinions about them. I believe that the last author from the essay section, Jules Charnier, is actually invented, but with a same power in the essay and with an added amusing factor.
“The Cabinet of Curiosities” section is formed by little snippets, all of them hilarious, with real amusing situations and ideas. This section is offering the reader a relaxing exit from the strangeness and weird atmosphere of the first section, but keeping the same odd and fantastic line of the collection.
Reggie Oliver plays in his stories with the strange, supernatural and fantastic, but not all these elements will be present in front, many of them are just hinted the author playing with the reader’s imagination. All the tension and guessed terror will act in the favor of the stories, adding to the pleasure of the reading. “Madder Mysteries” is a collection which will appeal greatly to the passionate of weird and bizarre, but the other readers can equally enjoy this collection.
Posted by Mihai A. at 10:29 AM

I've been absent from your blog because I have been fielding sharp darts from my boss at work. Hopefully by next week I'll have a new boss with a better sense of humour.

Barbara, no problem with the times of visit, it is always very good to have you here. I am sorry to hear about your boss, I hope you'll get a better one very soon :)