"Putting the Pieces in Place" by R.B. Russell 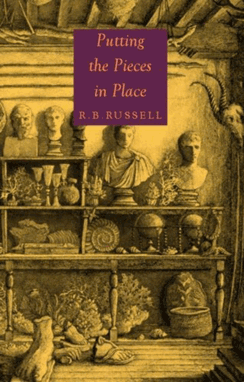 "Putting the Pieces in Place"
by R.B. Russell
Format: Hardcover, 128 pages
Publisher: Ex Occidente Press
R.B. Russell is one of the figures behind the small, independent publishing house recipient of three World Fantasy Awards, Tartarus Press. Now R.B Russell makes his debut with a collection of five stories “Putting the Pieces in Place”.
“Putting the Pieces in Place” – A collector is trying to gather items and recordings of a deceased violinist, Emily Butler. R.B. Russell is playing in the story that gives its name to the collection with the boundary between passion and obsession, a boundary that seems to disappear in some places. Making contributions to the obsessive but melancholic atmosphere are the music, the locations and the characters.
“There is Nothing I Wouldn’t Do” – A young woman pursuing her studies and trying to follow a known architect who inspires her goes in Ukraine. Here she lives a love story which will prove difficult to handle. Like the first story of the collection this one plays with the thin line between passion and obsession, but if the first story has a melancholic atmosphere in here the atmosphere is much more oppressive and disturbing. At the end of the story the author makes small hints of the outcome, but leaves much to the reader’s imagination, which will prove as powerful as if the images were fully descript.
“In Hiding” – David Barrett M.P. tries to escape a political scandal on a remote Greek island. A subtle piece, involving much of a human nature and our perception of the world surrounding us. Also what it looked like an obvious course of the story for me was turned in a surprising but pleasant way by the author in the end.
“Eleanor” – An author of a successful novel happens to meet the character of his novel. R.B. Russell creates a psychological piece with a subtle tangle between reality and fiction. The story is also an irony of our throwaway society, how can one thing be transformed from its initial point to an almost unrecognizable one.
“Dispossessed” – After taking care of an old lady a young woman sees herself in need to find a new place to live in. I find this story to be the darkest of the collection, with more descriptive images of violence and horror. Psychological aspects are caught in the story as well making their contribution in the creation of a strong story.
Many times I find myself more impressed by the psychological and subtle horror than the one involving excessive gore and violence and such is the case with this collection. In “Putting the Pieces in Place” R.B. Russell plays with human emotions without drawing a perceptible line between reality and fiction, passion and obsession, and creates an atmosphere of unease without pointing exactly the reason for it.
Posted by Mihai A. at 12:10 PM

This sounds very interesting. Are any of the stories available online to sample?

Unfortunately I am not aware of any, sorry.

Barbara, I think you would. It is an interesting collection :)