In the mailbox & very pleasant surprise 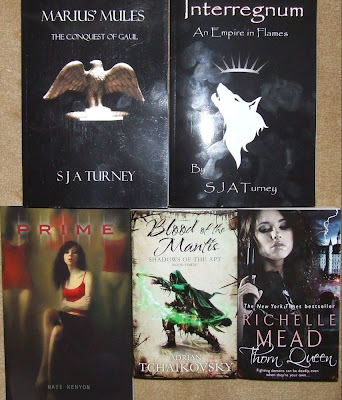 When I came home a few books awaited in my mailbox. I’ve been meaning to post them yesterday, but my Internet connection was down all day so a change of plans occurred. But, today when the connection was restored it came with a very pleasant surprise. It looks like my blog gathered over 100,000 hits since its birth. This is something I didn’t expected when I’ve started my blog and therefore it brings me great joy. And it is all thanks to you and I really hope that you’ll find reasons for coming back. Thank you all very much! It really means a lot to me :)
- "Marius' Mules" by S.J.A. Turney (through the courtesy of S.J.A. Turney);
It is 58 BC and the mighty Tenth Legion, camped in Northern Italy , prepare for the arrival of the most notorious general in Roman history: Julius Caesar. Marcus Falerius Fronto, commander of the Tenth is a career soldier and long-time companion of Caesar's. Despite his desire for the simplicity of the military life, he cannot help but be drawn into intrigue and politics as Caesar engineers a motive to invade the lands of Gaul .
Fronto is about to discover that politics can be as dangerous as battle, that old enemies can be trusted more than new friends, and that standing close to such a shining figure as Caesar, even the most ethical of men risk being burned.
- "Interegnum" by S.J.A. Turney (through the courtesy of S.J.A. Turney);
For twenty years civil war has torn the Empire apart; the Imperial line extinguished as the mad Emperor Quintus burned in his palace, betrayed by his greatest general. Against a background of war, decay, poverty and violence, men who once served in the proud Imperial army now fight as mercenaries, hiring themselves to the greediest lords.
On a hopeless battlefield that same general, now a mercenary captain tortured by the events of his past, stumbles across hope in the form of a young man begging for help. Kiva is forced to face more than his dark past as he struggles to put his life and the very Empire back together. The last scion of the Imperial line will change Kiva forever.
- "Prime" by Nate Kenyon (through the courtesy of Apex Book Company);
When simulated interactions are an essential part of life, a programming glitch can be devastating, especially for the company that controls the sims.
William Bellow is an experienced bug hunter who comes as close as any human to the anticipated Transformation that links man to machine. As he digs into the problems surrounding New London’s most advanced programming, the nature of his own memories and the events of his past are called into question. Desperate manipulations and complex deceptions take him from the corporate towers to the underground resistance as Bellow’s work quickly escalates into a fight for his life in both the physical and virtual worlds.
- "Blood of the Mantis" by Adrian Tchaikovsky (through the courtesy of Tor UK);
Driven by the ghosts of the Darakyon, Achaeos has tracked the stolen Shadow Box to the marsh-town of Jerez, but he has only days before the magical box is lost to him forever.
Meanwhile, the forces of the Empire are mustering over winter for their great offensive, gathering their soldiers and perfecting their new weapons. Stenwold and his followers have only a short time to gather what allies they can before the Wasp armies march again, conquering everything in their path. If they cannot throw back the Wasps this spring then the imperial black-and-gold flag will fly over every city in the Lowlands before the year's end.
In Jerez begins a fierce struggle over the Shadow Box, as lake creatures, secret police and renegade magicians compete to take possession. If it falls into the hands of the Wasp Emperor, however, then no amount of fighting will suffice to save the world from his relentless ambition.
- "Thorn Queen" by Richelle Mead (through the courtesy of Transworld Books).
Eugenie Markham is a shaman for hire, paid to bind and banish creatures from the Otherworld. But after her last battle, she’s also become queen of the Thorn Land. It’s hardly an envious life, not with her kingdom in tatters, her love life in chaos, and Eugenie eager to avoid the prophecy about her firstborn destroying mankind. And now young girls are disappearing from the Otherworld, and no one—except Eugenie—seems willing to find out why.
Eugenie has spilled plenty of fey blood in her time, but this enemy is shrewd, subtle, and nursing a very personal grudge. And the men in her life aren’t making things any easier. Her boyfriend Kiyo is preoccupied with his pregnant ex, and sexy fey king Dorian always poses a dangerous distraction. With or without their help, Eugenie must venture deep into the Otherworld and trust in an unpredictable power she can barely control. Reluctant queen or not, Eugenie has sworn to do her duty—even if it means facing the darkest—and deadliest—side of her nature…
Thank you all very much for the sent books!
Posted by Mihai A. at 12:01 PM

You have Thorn Queen? I love Richelle's books!

I loved Interregnum a lot - blood and guts and all men cast (ok there is one minor female character) but if you like such (Ten Thousand by P. Kearney is a good comparison) it's worth

Marius Mules shows its indie roots - typos, anachronisms and such but it is entertaining too though less blood and guts, more of historical adventure

The Kinden series (3 more are now scheduled at 6 months intervals, next #4 has even a title for early Feb 10) is becoming one of the most complex and memorable in current sff but you have to start with book 1.

Adele, I didn't read anything written by Richelle Mead :)

Liviu, your review picked my interest for these books. "Dragonfly Falling" is next on my list :)

Peter, thank you very much! You are very kind :)

I was sent Storm Born & Thorn Queen to review a few weeks back and I really enjoyed them both. I like this genre a lot so it was nice to read a new series. I hope you enjoy it :)