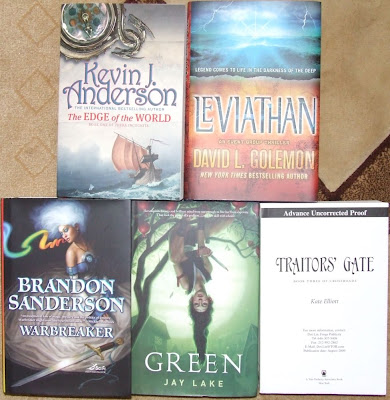 I am always happy to come back home and find a mailbox full of books. And it seems that it happened again, to my great joy, with three titles I was looking forward to read since the beginning of the year.
- "The Edge of the World" by Kevin J. Anderson (through the courtesy of Orbit Books);
After generations of friction, the leaders of two lands meet in the holy city of Ishalem to bring an end to the bloodshed and to divide the world between them.
Sadly, this new spirit of fellowship is shortlived. A single tragic accident destroys, in minutes, the peace that took years to build. The world is once more cast into the fires of war - and this time the flames may burn until nothing remains. From the highest lord to the lowest servant, no man or woman will be unchanged by the conflict.
But while war rages across both continents, a great quest will defy storms and sea serpents to venture beyond the horizon, where no maps exist - to search for a land out of legend. It is a perilous undertaking, but there will always be the impetuous, the brave and the mad who are willing to leave their homes to explore the unknown.
Even unto the edge of the world …
- "Warbreaker" by Brandon Sanderson (through the courtesy of Tor Books);
Warbreaker is the story of two sisters, who happen to be princesses, the God King one of them has to marry, the lesser god who doesn’t like his job, and the immortal who’s still trying to undo the mistakes he made hundreds of years ago.
Their world is one in which those who die in glory return as gods to live confined to a pantheon in Hallandren’s capital city and where a power known as BioChromatic magic is based on an essence known as breath that can only be collected one unit at a time from individual people.
By using breath and drawing upon the color in everyday objects, all manner of miracles and mischief can be accomplished. It will take considerable quantities of each to resolve all the challenges facing Vivenna and Siri, princesses of Idris; Susebron the God King; Lightsong, reluctant god of bravery, and mysterious Vasher, the Warbreaker.
- "Green" by Jay Lake (through the courtesy of Tor Books);
She was born in poverty, in a dusty village under the equatorial sun. She does not remember her mother, she does not remember her own name—her earliest clear memory is of the day her father sold her to the tall pale man. In the Court of the Pomegranate Tree, where she was taught the ways of a courtesan…and the skills of an assassin…she was named Emerald, the precious jewel of the Undying Duke’s collection of beauties.
She calls herself Green.
The world she inhabits is one of political power and magic, where Gods meddle in the affairs of mortals. At the center of it is the immortal Duke’s city of Copper Downs, which controls all the trade on the Storm Sea. Green has made many enemies, and some secret friends, and she has become a very dangerous woman indeed.
- "Traitors' Gate" by Kate Elliott (through the courtesy of Tor Books);
In Spirit Gate and Shadow Gate, Kate Elliott took readers to the fascinating world of the Hundred, a land teeming with an array of cultures, gods, and conflicts blighted by the shadow of chaos and destruction. Now, with the same intensity and dramatic sweep that has brought this epic to life, Elliott returns to the exquisitely crafted cities and landscapes of the Hundred, in a thunderous conclusion to the saga.
In the darkness of war and destruction, forces gather to reclaim the peace: Those immortal Guardians who still serve justice seek a means to end the devastating reign of one of their own; a hired outlander army struggles to halt the advance of the horde that has despoiled vast lands and slaughtered countless people in its murderous wake, while still guarding against a burgeoning threat from an aggressively expansionist empire; and the eagle reeves who have long been the only law enforcers of the Hundred struggle to reorganize after a devastating massacre has decimated their numbers. But even as these forces give hope to those who would live in peace, a terrible danger looms: a traitor with Imperial ambitions, the most dreaded, least anticipated threat of all…
In the unfolding drama of political upheaval and violent change, nothing is certain, as alliances dissolve and power shifts with the unpredictability of a desert sandstorm. A riotous epic with the vast breadth and excitement only masterful storyteller Kate Elliott can summon, Traitors’ Gate will leave her many readers begging for more.
- "Leviathan" by David L. Golemon (through the courtesy of Thomas Dunne Books).
The ships of the world are under attack, attacks so sudden and vicious that many ships are lost without a single distress call. The navies of the world start a frenzied search, but even these ships disappear without a trace.
Enter the Event Group, the most secret organization in U.S. history. Armed with proof that history is repeating itself, the Group finds themselves in the grasp of an insane genius straight out of the pages of Jules Verne. They are up against the descendent of the man who was the inspiration for the captain of a vessel known to the world as Nautilus.
Legend comes to life in the form of Leviathan, the most advanced undersea vessel in history. She will stop at nothing to save the seas and to render justice to humankind for a world that has long been dying, a world Leviathan plans to alter forever, unless the Event Group can stop her!
Thank you all very much!
Posted by Mihai A. at 12:05 PM

I really enjoyed edge of the World :). I actually liked it better then I thought I would, as I didn't expect anything going into reading it.

Cindy, this is one of the titles I was looking forward to read this year. I am very happy I've got a copy :)

I'm looking forward to your review of "Green". The snippet provided by TOR was enough to whet my reading appetite.