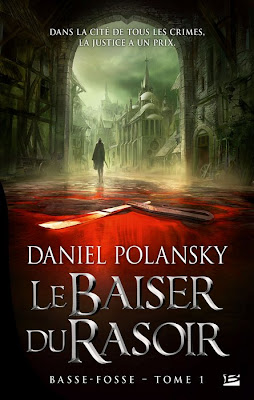 I will not bore you again with my dislike of characters on the book covers. Actually it is not so much a dislike, but something that I am not very much attracted to. The balance is inclined towards the opposite scale after opening the book covers, however. Strong and clearly defined characters are among the main factors that make me enjoy a story more. Today I will not talk about Daniel Polansky’s debut novel, because, unfortunately, caught in the time whirlpool last year I didn’t get the chance to pass over the book cover. Instead I will talk about that cover or more exactly covers. Daniel Polansky’s novel had two different covers for its UK and US editions, but also two different titles. “The Straight Razor Cure” in the UK featured a character on the cover, not clearly defined, but with the customary hood of the many fantasy book covers of late. Instead “Low Town” in the US had a far more simple cover, more concentrated on letters and design. It is true that I may not have managed to open Daniel Polansky’s novel, but I ventured outside the English language market and discovered a cover very much on my liking. And where else could such a cover be if not in France? The Bragelonne edition of “The Straight Razor Cure” or “Low Town”, “Le Baiser du Rasoir” (which is translated as “The Kiss of Razor” I believe, so we have a third title) is a beauty focused on scene and atmosphere, with lovely details of the buildings seen and attractive colors. I also love that the razor actually splits the cover in two plans, but without breaking and with the best effect on the overall picture. The author of the best cover I’ve seen so far for Daniel Polansky’s novel is Fred Augis, a French artist born in Lyon, currently living in Paris and whose other works can be seen at Between Dog and Wolf website.

Wow this is really really nice...

I never fail to drool over the French covers you post. France is a lucky country in the SFF cover art department.