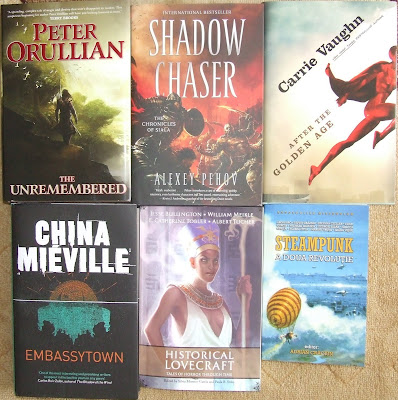 Although it was a busy month it still held quite some pleasant moments. A few such moments arrived together with a few books in the mailbox. From the latest arrivals I have to admit that China Miéville’s “Embassytown” is the most appealing to me. I really like China Miéville’s works and I am certainly looking forward to his latest, in this case, “Embassytown”. A blend between historical fiction and horror, more so a Lovecraftian one, sounds very appealing as well. “Historical Lovecraft”, the anthology edited by Silvia Moreno-Garcia and Paul R. Stiles looks very interesting and comes with a concept that is right up my alley. “Steampunk: Second Revolution” is a Romanian anthology dedicated as its name suggests to the steampunk. I have to say that I already read Adrian Crãciun’s anthology and I am already working on the review. I was interested in “Steampunk: Second Revolution” because it looks that for once we kept in line with a trend, not that is always a good thing, and I was curious how the Romanian fiction deals with it. It was an interesting experience. More about it soon. Peter Orullian’s “The Unremembered” is one of the novels that is much talked online. It sounds quite interesting to me too and I will certainly give it a chance as soon as possible. Alexey Pehov’s “Shadow Chaser” is the second novel in his series, “Chronicles of Siala”. I have the first novel as well, but I didn’t read it yet. Therefore “Shadow Chaser” might have to wait a bit more. I am not exactly sure where to place Carrie Vaughn’s “After the Golden Age” on my scale of interest. Superheroes were never on top of my interests and almost always I preferred something else in their favor. Therefore, I am not exactly sure if I will manage to read Carrie Vaughn’s novel and if so, how soon.

- "Embassytown" by China Miéville (through the courtesy of Panmacmillan);

Embassytown: a city of contradictions on the outskirts of the universe.
Avice is an immerser, a traveller on the immer, the sea of space and time below the everyday, now returned to her birth planet. Here on Arieka, humans are not the only intelligent life, and Avice has a rare bond with the natives, the enigmatic Hosts - who cannot lie.
Only a tiny cadre of unique human Ambassadors can speak Language, and connect the two communities. But an unimaginable new arrival has come to Embassytown. And when this Ambassador speaks, everything changes.
Catastrophe looms. Avice knows the only hope is for her to speak directly to the alien Hosts.
And that is impossible.

Historical Lovecraft, a unique anthology blending historical fiction with horror, features 26 tales spanning centuries and continents. This eclectic volume takes the readers through places as varied as Laos, Greenland, Peru, and the Congo, and from antiquity until the 20th century, pushing the envelope of Lovecraftian lore. William Meikle’s inquisitor tries to unravel the truth during a very hostile questioning. Jesse Bullington narrates the saga of a young Viking woman facing danger and destruction. E. Catherine Tobler stops in Ancient Egypt, where Pharaoh Hatshepsut receives an exquisite and deadly gift. Albert Tucher discovers that the dead do not remain silent in 10th century Rome. These are tales that reimagine history and look into the past through a darker glass. Tales that show evil has many faces and reaches through the centuries. Tales that will chill your heart.

- "Steampunk: Second Revolution" edited by Adrian Crãciun (through the courtesy of Millennium Books);

- "The Unremembered" by Peter Orullian (through the courtesy of Tor Books);

The gods, makers of worlds, seek to create balance—between matter and energy; and between mortals who strive toward the transcendent, and the natural perils they must tame or overcome. But one of the gods fashions a world filled with hellish creatures far too powerful to allow balance; he is condemned to live for eternity with his most hateful creations in that world’s distant Bourne, restrained by a magical veil kept vital by the power of song.
Millennia pass, awareness of the hidden danger fades to legend, and both song and veil weaken. And the most remote cities are laid waste by fell, nightmarish troops escaped from the Bourne. Some people dismiss the attacks as mere rumor. Instead of standing against the real threat, they persecute those with the knowledge, magic and power to fight these abominations, denying the inevitability of war and annihilation. And the evil from the Bourne swells….
The troubles of the world seem far from the Hollows where Tahn Junell struggles to remember his lost childhood and to understand words he feels compelled to utter each time he draws his bow. Trouble arrives when two strangers—an enigmatic man wearing the sigil of the feared Order of Sheason and a beautiful woman of the legendary Far—come, to take Tahn, his sister and his two best friends on a dangerous, secret journey.
Tahn knows neither why nor where they will go. He knows only that terrible forces have been unleashed upon mankind and he has been called to stand up and face that which most daunts him—his own forgotten secrets and the darkness that would destroy him and his world.

- "Shadow Chaser" by Alexey Pehov (through the courtesy of Tor Books);

Saddened because they have left one of their number in a grave in the wilderness, Harold and his companions continue their journey to the dreaded underground palace of Hrad Spein. There, knowing that armies of warriors and wizards before them have failed, they must fight legions of untold, mysterious powers before they can complete their quest for the magic horn that will save their beloved land from The Nameless One. But before they can even reach their goal, they must overcome all manner of obstacles, fight many battles…and evade the frightful enemies on their trail.

- "After the Golden Age" by Carrie Vaughn (through the courtesy of Tor Books).

Can an accountant defeat a supervillain? Celia West, only daughter of the heroic leaders of the superpowered Olympiad, has spent the past few years estranged from her parents and their high-powered lifestyle. She’s had enough of masks and heroics, and wants only to live her own quiet life out from under the shadow of West Plaza and her rich and famous parents.
Then she is called into her boss’ office and told that as the city’s top forensic accountant, Celia is the best chance the prosecution has to catch notorious supervillain the Destructor for tax fraud. In the course of the trial, Celia’s troubled past comes to light and family secrets are revealed as the rift between Celia and her parents grows deeper. Cut off from friends and family, Celia must come to terms with the fact that she might just be Commerce City’s only hope.
This all-new and moving story of love, family, and sacrifice is an homage to Golden Age comics that no fan will want to miss.

Thank you very much! 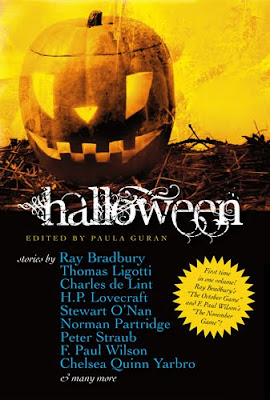 Last week-end the winners of the 2011 Nebula Awards have been announced: 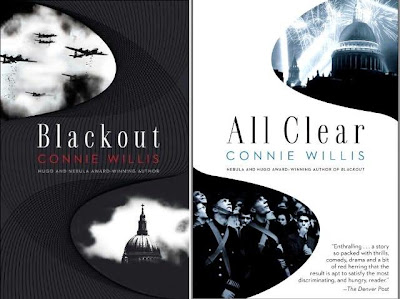 Novella: “The Lady Who Plucked Red Flowers Beneath the Queen’s Window” by Rachel Swirsky (Subterranean Summer ’10)
Novelette: “That Leviathan Whom Thou Hast Made” by Eric James Stone (Analog 9/10)

“How Interesting: A Tiny Man” by Harlan Ellison (Realms of Fantasy 2/10)

Congratulations to all the winners!
Posted by Mihai A. at 1:00 PM No comments:

Returning to the usual schedule

Most of this very busy month is over, although it might hold another business trip next week that will lead to further 4 or 5 days of silence, but until then I can return to the usual blogging schedule. I do have to catch up with plenty of reviews and some interviews, but hopefully I will be able to bring these back of track slowly. How were your past few weeks?
Posted by Mihai A. at 1:15 PM 2 comments:

A period of silence

In the past week and the next week there are a few changes to be made at work and this process requires my full attention. Also, as usual for this month, I will need to make a business trip and therefore as much as I would like to post regularly I will not be able to do so. However, this hectic time of year will settle itself later this month, around 20th or 25th, and it is then when I will start blogging on regular basis again. I hope to see you all at the end of May and until then, please take care of yourselves :)