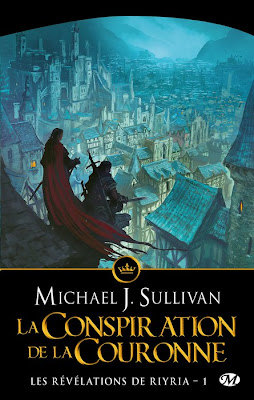 I am certain that Michael J. Sullivan lives a dream, he turned from a self-published writer into a contracted author and now he steps even farther. Farther because Michael J. Sullivan became a translated writer as well, with the first novel in The Riyria Revelations, “The Crown Conspiracy”, being published in France this month, by Milady, a Bragelonne imprint. I really like Michael J. Sullivan’s series, despite that I still need to catch up with the last two novels in The Riyria Revelations, “Wintertide” and “Percepliquis”. It is a fantasy story in the old style, adventurous and fun, that becomes stronger with each novel. I felt it myself, especially since the last novel of the series I read, “The Emerald Storm”, was my favorite so far. Although I still need to sit at my table and write its review.
Back to the French fantasy market, as tiresome as it might seem, once again the French readers are spoiled with an excellent cover artwork. I am not a fan of the covers Orbit Books chose for their three omnibus editions of Michael J. Sullivan’s “The Riyria Revelations”. No fan at all. Still, if you opted for highlighted characters on the book cover why not go with the choice made by Milady’s art department. Especially since they did not go with only the characters, but also set a scene and atmosphere for their cover. It is also very true that I’ve seen this type of art on a book cover before and it is quite typical for the fantasy genre, but same as with Michael J. Sullivan’s novels, what you see is what you get. A catchy and very enjoyable fantasy adventure in this case. And as I like “The Riyria Revelations” I also like what the magical touch of the very talented Marc Simonetti (responsible for plenty of other awesome French book covers we’ve seen in the past) did with the cover for “La Conspiration de la Couronne” (The Crown Conspiracy).
Later edit: A small negligence on my behalf made the French edition the first translation of Michael J. Sullivan’s work. However, as Michael points out in the comments, his works were first published outside the English market on Czech Republic, Poland and Spain, with contracts signed for Russian, Portuguese (Brazil), Japanese and German editions.
Posted by Mihai A. at 1:30 PM

Congratulations, you beat me to it. I had planned to make a comprehensive post on all the various covers including the French one, but I had other things in the way.

Thanks for taking the time to show it. It is pretty.

Just a minor correction. This is not the first translated publication. My books were first translated into Czech almost a year ago. The Polish versions came out after that, followed most recently by the Spanish translation which I believe, debuted on February 2nd. I also signed contracts for Russian, Portuguese (Brazil), Japanese, and German which I don’t believe have been released yet.

Thank you very much, Michael, for all the information. I made a correction to the original post. Congratulations, it is a very good looking cover! I really like it! Especially since Marc Simonetti is one of my favorites artists.
It is good to see so many contracts gathering and I hope that I'll see your novels in Romania soon too :)

Many congrats to Michael for his success. If his books are "in the old style, adventurous and fun" as you say, they most certainly are worth reading. Traditional, adventurous fantasy never gets old.

On Marc Simonetti, I agree that he is responsible for some excellent French fantasy covers. I particularly like his cover for The Name of the Wind by Rothfuss.

Federico, Michael's novels are certainly worth of reading them. I enjoyed them a lot, those I got to read so far :)
I featured Marc's art every time I got a chance and also I was lucky to interview him a while back. He is a great artist.