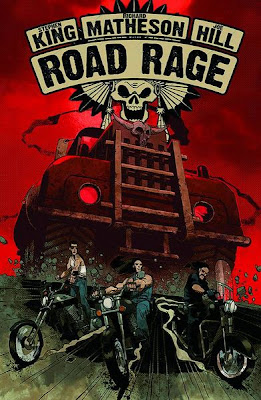 Today, IDW Publishing will release “Road Rage”, a four issue comic book that adapts Richard Matheson’s “Duel” and Stephen King and Joe Hill’s “Throttle” stories to the comic format, under the same title as the audiobook that collects these two stories. I am a fan of Stephen King and Joe Hill, no secret there, and I loved their first collaboration and the story born from it, the excellent “Throttle”. I cannot say the same about “Duel”, because I am not familiar with the story, but “I Am Legend” is among my top favorite books and a true classic. There is no wonder then that I am thrilled to see this comic book adaptation coming up.

“Throttle”, the first of the two stories unfolding in “Road Rage” comic book, is adapted by Chris Ryall and the artist Nelson Dániel. “Road Rage: Throttle” #1 is released today on both print and digital editions, accompanied by variant covers and a temporary Tribe tattoo, with the second issue due to be released in March, followed by “Road Rage: Duel” in April and May. On Stephen King’s website you can find some more information about the comic book adaptation as well as production assets and a black and white preview of “Road Rage: Throttle”, while on Nelson Dániel’s DeviantArt account you can see two pages in color and plenty of other works of the artist.