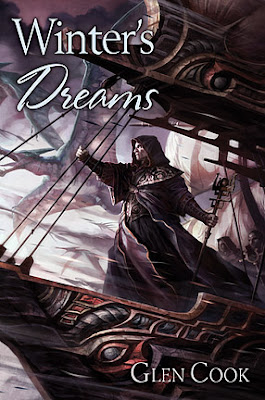 One artist who speaks directly to my heart is Raymond Swanland. He is not the only one, but at this moment his works make the fastest way directly to my soul. I talked about Raymond Swanland in plenty of occasions and I will do it again, because it gives me great pleasure to feature his wonderful works. Now is such an opportunity, because once again Raymond Swanland is the first to welcome the readers to one of Glen Cook’s works with another beautifully crafted cover artwork. Following the beautiful covers made for Glen Cook’s “Darkwar”, “Instrumentalities of the Night”, “Black Company” and “Dread Empire” series Raymond Swanland illustrated the cover of the upcoming “Winter’s Dreams”, a collection of fourteen stories released by Subterranean Press. I really like that Subterranean Press opted also for Raymond Swanland as the cover artist, keeping the line set by the artist for Glen Cook’s works and especially since he again produced a lovely artwork. Not necessarily the character and the hooded cliché we saw lately on the fantasy book covers, but the details, the atmosphere and the personal and easily recognizable mark of the artist. A very luring cover indeed. As for Glen Cook’s volume of stories, the description provided by Subterranean Press sounds very tempting too, although I was never thrilled with the spicy prices of this publisher.
Glen Cook is, of course, best known for his enormously popular series fiction, which includes the Garrett P.I. and Dread Empire sequences, as well as the internationally acclaimed Chronicles of the Black Company. Readers familiar only with this aspect of Cook’s career will find a great many pleasures—and an equal number of surprises—in his vibrant new collection, Winter’s Dreams.
The fourteen standalone stories in Winter’s Dreams range in length from vignettes (“Appointment in Samarkand”) to novellas (“In the Wind”). Together, they encompass an astonishing variety of themes, tones, styles, and settings. Not one of these stories bears the slightest resemblance to the others. Each one manages to enchant, illuminate, and entertain in its own distinctive fashion.
- In the near future America of “Song from a Forgotten Hill,” the nations’ tragic racial history replays itself in an all too familiar form.
- “The Seventh Fool” recounts the comic misadventures of a charming con man who outsmarts both his gullible target—and himself.
- “The Waiting Sea” encapsulates the entire life history of a navy veteran haunted by the sea and by the faceless voices only he can hear.
- In “Ponce,” a poverty stricken St. Louis family encounters a mysterious blue-eyed dog—a dog that serves as a conduit to the undisclosed secrets of the universe.
- “The Recruiter” presents a powerfully disturbing portrait of an ultra-violent future and asks the question: How far will a man go in order to survive?
Equally suitable both for newcomers and for long-time Glen Cook fans, Winter’s Dreams is something special, a consistently enthralling volume that claims new imaginative territory at every turn.
Table of Contents:
“Song from a Forgotten Hill”
“And Dragons in the Sky”
“Appointment in Samarkand”
“Sunrise”
“The Devil’s Tooth”
“In the Wind”
“The Recruiter”
“The Seventh Fool”
“Ponce”
“Quiet Sea”
“Darkwar”
“Enemy Territory”
“The Waiting Sea”
“Winter’s Dreams”
Posted by Mihai A. at 1:30 PM