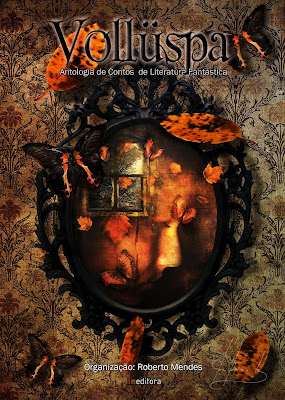 I consider J.R.R. Tolkien’s “Lord of the Rings” trilogy to be the foundation stone of my love for fantasy literature. Although I believe that the respective stone was actually set long before the moment of “Lord of the Rings” reading with the constant help of myths and legends. I loved them since my childhood and I love them still. One special place among my preferences is held by Nordic legends and the Norse mythology and though my expertise doesn’t run deep in the matter I know that “The Poetic Edda” is considered the most important source of Norse mythology. The first poem of “The Poetic Edda” is Volüspá, the story of the creation of the world and its coming end told by a völva, a seeress, to Odin. “The Poetic Edda” inspired plenty of works of fiction and continues to inspire. One such new project is a Portuguese anthology of short stories, titled “Vollüspa”, edited by Roberto Mendes and with precise goals of revitalizing the Portuguese speculative fiction scene and giving a chance to the science fiction, fantasy and horror local authors to express themselves. But Roberto Mendes, the editor of “Vollüspa”, doesn’t wish to stop here. He wants to make “Vollüspa” a constant presence on the Portuguese speculative fiction market through a series of such anthologies.
The first “Vollüspa” anthology offers a journey into the fantastic, the reader can experience the history of a last vampire, receive messages from machines that write alone, watch the fall of Rome, hear the sounds of a song that touches the souls in a very special way, be pushed to the limit by the mythical figure of death, travel to the sky discovering its secrets or celebrate an artificial Christmas. 2 horror, 5 science fiction and 8 fantasy stories are the reader’s invitations to this journey:
“Eternity” by João Ventura (Science Fiction)
“Christmas®” by Carlos Silva (Science Fiction)
“The Little Guide of Heaven, by Tristan de Sapincourt” by Afonso Cruz (Science Fiction)
“The Fall of Rome, before the soap opera” by Luís Filipe Silva (Science Fiction)
“Genesis – Apocalypse” by Roberto Mendes (Science Fiction)
“Life is a Dream” by José Manuel Morais (Horror)
“The Evil in our Rio” by José Pedro Lopes (Horror)
“The Machine” by Álvaro de Sousa Holstein (Fantasy)
“The Chord of Souls” by Carina Portugal (Fantasy)
“The Fall” by Carla Ribeiro (Fantasy)
“The Last” by Joel Puga (Fantasy)
“The Room” by Marcelina Gama Leandro (Fantasy)
“While Sleeping” by Nuno Gonçalo Poças (Fantasy)
“A Question of Place” by Pedro Ventura (Fantasy)
“Red” by Regina Catarino (Fantasy)
I received an electronic copy through the courtesy of the editor, Roberto Mendes, and I will try to read it little by little with the help of my scarce knowledge of Latin languages. I am not sure how my reading attempt would end, but I do hope that someday we will be able to read this anthology and the Portuguese authors on the English market as well. More so, I hope that more writers outside the English market would find their way on it in the future. It will certainly enrich the world of speculative fiction.
Posted by Mihai A. at 1:30 PM