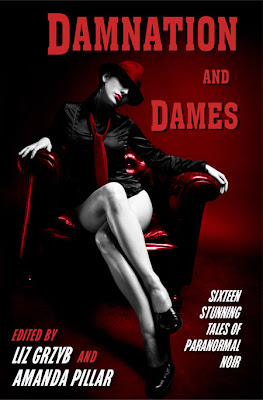 Noir crime fiction seems to gather a new dimension lately, with the newly added paranormal elements that tend to become a trend. I do not have much of a problem with it, after all, I was and still am a great admirer of noir fiction and the new touch gives it an interesting flavor. It even manages to conquer a little my dislikes for overly-used vampires and zombies themes. And there is one anthology that might contain these themes, but still sounds appealing. Liz Grzyb and Amanda Pillar’s anthology, “Damnation & Dames”, called for submissions of stories which show the paranormal and noir crime worlds colliding; you might find werewolf femme fatales, vampire hardboiled detectives, alcoholic psychic journalists, zombie bankrobbers, ghostly gendarmes, demonic insurance salesmen, down-on-their-luck djinns, double-crossing mummies, or even fae with a love for red herrings and selected 16 such short stories for the final line-up. As I said vampires and zombies don’t do the trick for me anymore, but noir crime does and this is the element that attracts me the most at “Damnation & Dames”. More so, another journey into the Australian speculative fiction sounds very good, especially when one of the guides, Amanda Pillar, offered me some very interesting similar travels before in which I discovered some of the names featured on this line-up too, Felicity Dowker, Rob Hood, Pete Kempshall and the extremely talented Lisa L. Hannett and Angela Slatter. And since Liz Grzyb and Amanda Pillar’s “Damnation & Dames” was released by Ticonderoga Publications the past week-end we do not have to wait anymore for this anthology to be published. I will have a review of the collection as soon as “Damnation & Dames” will be available on the Book Depository and I’ll be able to order a copy.

The residents of Australia, Canada, Great Britain, New Zealand and USA can also enter by April, 30 in a book giveaway on Goodreads for a chance to win a copy of “Damnation & Dames” edited by Liz Grzyb and Amanda Pillar.

While I'm also getting pretty tired of the zombie / vamp thing, combining them (and general paranormal stuff) with noir sounds like a killer idea. Definitely must check this collection out.

I can't wait to receive my copy of the book and read it...if that cover is anything to go by, it's going to be smokin'!

Thanks for the shout out. =) My co-author from "Damnation and Dames", Alan Baxter, actually has a paranormal noir novella published online at the moment: http://redpennypapers.com/fiction/serials/the-darkest-shade-of-grey-alan-baxter/ - so if you're looking to fill in time while you wait to get your hands on D&D, that might help! ;)

Thanks for the plug! The book should be available through book depository, amazon and barnes and noble by the end of next week. If you'd like a review copy please email me your address (our email address can be found at ticonderogapublications.com)

Cheers, Russell. I'll be keeping an eye out for it on Amazon

Federico, the collection looks very good. I am looking forward to read it :)

Felicity, thank you for your comment. I saw Alan Baxter's story on Red Pennny Papers, but I didn't get a chance to read it, yet. I will though by the time I'll get a copy of "Damnation & Dames" :)

Russell, thank you for your comment and offer. I am looking forward to "Damnation & Dames", but not only. You have quite a few very interesting title coming up :)