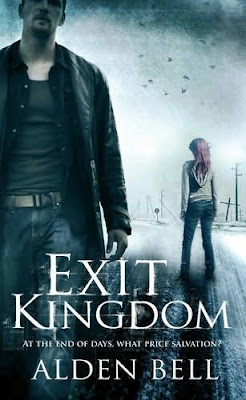 There are plenty of labels that throw me away from books in the blink of an eye, vampires and zombies being the most recent and unappealing trends for me. There are other labels that work in the opposite direction though and I find myself sometimes stranded for a while in a trend that is attractive to me for one reason or another. Naturally, there are exceptions from these rules. One such exception was Alden Bell’s “The Reapers are the Angels”, one of my top favorites of 2010 and recent times, a novel with zombie elements fortunately overpowered by its beauty and central character, Sarah Mary Williams aka Temple. It seems that this year I will make another exception for a novel featuring zombies, “Exit Kingdom”, because I recently discovered that a new novel by Alden Bell, a pseudonym used by Joshua A. Gaylord, will be released.

Now, I am not sure about some pieces of information regarding Alden Bell’s “Exit Kingdom”. The novel is scheduled to be released by Tor UK in September, but I found a different title by Alden Bell scheduled to be released by Tor Books US in May, “Somewhere I Have Never Travelled”. This one has no description however and, although I am not entirely sure, I think that we are talking about the same novel, but with a different title. After all, it would not be the first time when the UK and the US publishers go for a different title. I hope to get hold of this information and the actual release dates for an update of this post. Until then, here is the synopsis of Alden Bell’s “Exit Kingdom”.

In a world where the undead outnumber the living, Moses Todd roams the post-apocalyptic plains of America. His reprobate brother, Abraham - his only companion - has known little else. Together, they journey because they have to; because they have nowhere to go, and no one to answer to other than themselves. Travelling the bloody wastelands of this ruined world, Moses is looking for a kernel of truth, and a reason to keep going. And a chance encounter presents him with the Vestal Amata, a beguiling and mysterious woman who may hold the key to salvation. But he is not the only one seeking the Vestal. For the Vestal has a gift: a gift that might help save what is left of humanity. And it may take everything he has to free her from the clutches of those who most desire her.

Thank you for sharing this. I LOVED "The Reapers are the Angels" and had no idea Bell had another book coming.

Yes, thanks for this info. I too loved Reapers

Hi, there--Thanks for taking such an interest! Actually, "Somewhere I Have Never Travelled" is a different book entirely (a ghost book) that was originally supposed to be released in May--but the publication of that one has been delayed. So the September release of "Exit Kingdom" will be the next book. Hope you enjoy it--even without Temple!

now this is what i call GREAT news.

Joshua, thank you very much for the information! I am looking forward to read your novels when they are released :)

Theresa, Ben & Horia - excellent new indeed. I was unaware of this title and stumble upon it by chance. It seems odd though because I do believe that "The Reapers are the Angels" was very well received and I expected that a new book by Alden Bell to be promoted more. Anyway, it is good that it is published :)