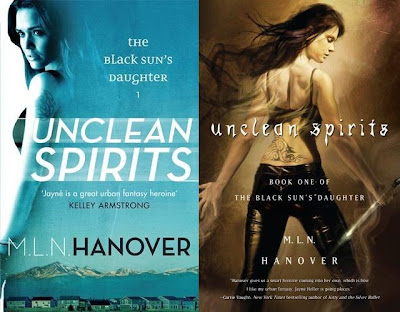 "Unclean Spirits"
by M.L.N. Hanover
Publisher: Orbit Books (UK) & Pocket Books (USA)
The review is based on a bought copy of the book
Unclean Spirits is the first book in a bold and fast-paced urban fantasy series starring Jayné Heller. When college student Jayné Heller's uncle is murdered, she goes to Denver to settle his estate and mourn the loss of the only member of her family who has always been on her side. She discovers that her uncle has left her quite a legacy: a string of property across the world, several very full bank accounts - and an extremely unconventional business. It turns out Uncle Eric has been secretly fighting to rid the world of supernatural 'riders' - demons, vampires, werewolves and all sorts of other nasty parasites - since before Jayné was born. Now it's up to Jayné to avenge her uncle's death and continue his work - if she can survive her first week on the job.
I a literary world split in plenty of genres, but also in more and more sub-genres, two niches that never managed to attract me in any way are urban fantasy and paranormal romance. Also, it never helped these sub-genres cases the same patterned book covers encountered while browsing through the book shelves. I am very certain that “Unclean Spirits” would not have stirred even a mild interest from my part if it was not for its author. M.L.N. Hanover’s name didn’t say anything to me until I found out that it is the pseudonym of Daniel Abraham, one of the writers I came to fully appreciate after I had started to read recently his “The Long Price Quartet”. Only then I dared to try, for the third time in my reading experience, another urban fantasy title, M.L.N. Hanover’s “Unclean Spirits”.
With all the fears and reluctance I had because of my previous experiences with the sub-genre the introduction of “Unclean Spirits” hooked me in the story. And page by page I conquered my hesitation in this case. From the introductory section “Unclean Spirits” comes with an interesting concept, the riders, parasite spirits that can infect a human through magical powers. The concept rounds well around the parasitic behavior, from taking over its host to certain life cycles, this idea has a strong and logical base. Unfortunately, it is only a base, because M.L.N. Hanover doesn’t go in the depth of it and doesn’t build much on the aspects resulting from this concept, such as the Invisible College or the Pleroma.
The character who finds herself facing the Invisible College and its leader, Randolph Coin, is Jayné Heller, a disoriented dropout college girl who inherits her uncle’s assets after his death. Only this inheritance comes with a little extra and sends Jayné Heller’s world in a new and totally different perspective. Jayné is a charismatic character, with a strong voice and an attractive attitude. And if these are not enough to make the reader like Jayné, her constant uncertainty in taking one road or another from this point of her life forward makes her a very human and interesting character. The supporting cast is not on the same level as the main character, but they do bring plenty of contribution to the act. Aubrey, Chogyi Jake, Ex and especially Midian make the story more enthralling with their problems and temperament, with wit and humor. There is a downside on the part of Kim, who seems to be thrown in the story a bit forcefully and doesn’t exactly fit the general picture, and Randolph Coin, who is just the negative character, but without breaking the surface of the simple villain position he holds. In my opinion, an in depth approach for the Randolph Coin character would have helped “Unclean Spirits” more.
The main plot is straightforward. There are no additional facets to the intrigue, the reader just moves from the point A, settling for the plan of action, to the point B, taking the respective action, taking a straight and direct path. It is true that “Unclean Spirits” holds a love triangle and Jayné taking in her new station, but these are in strict relation with the plot. M.L.N. Hanover’s unsophisticated language approach helps the reader to follow the path pretty quick, but with plenty of very well executed action scenes to not turn it in an unremarkable journey. The plot’s conclusion is predictable, but I could not shake the feeling that there is more to the story than what “Unclean Spirits” reveals. Especially since the riders concept of the novel feels like only the initiatory part of a bigger tale. And since “Unclean Spirits” is just the first novel in M.L.N. Hanover’s quartet, “Black Sun’s Daughter”, I am certain that the next volumes will definitely reveal more and become stronger.
For the readers who find themselves in the same situation as me in the case of “Unclean Spirits” I have to say that M.L.N. Hanover is no Daniel Abraham in terms of style. But that doesn’t make “Unclean Spirits” a bad reading; on the contrary, it makes it an original and fun approach of a different genre with an entertaining result. It also proves the versatility of Daniel Abraham/M.L.N. Hanover. And although “Unclean Spirits” didn’t win me over and turned me into a reader of its sub-genre, it did make me interested in the rest of M.L.N. Hanover’s novels in the “Black Sun’s Daughter” series.
Posted by Mihai A. at 12:30 PM