“The Godless World” by Brian Ruckley optioned for film/TV 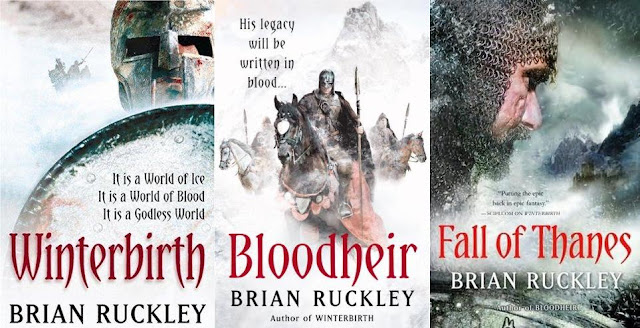 Brian Ruckley is one of the modern writers who became one of my favorites and the main blame for this situation can be put on his fantasy series “The Godless World”. Not only that, but with the passing of time the three novels of his debut trilogy are closer to my heart and each time I open them for a very short reminder of the story I re-discover plenty of wonderful things and the series becomes better. I had the pleasant opportunity to make an interview with Brian Ruckley after the release of the first two novels of “The Godless World”, “Winterbirth” and “Bloodheir”, and among other things we talked about a potential movie adaptation of his trilogy. Well, it seems that things moved a bit closer for that likely event to become reality because “The Godless World” got optioned for film/TV. This doesn’t mean necessarily that we will see a movie based on Brian Ruckley’s series, but it is a progress towards this possibility. I personally am afraid when it comes to movie adaptations of the books I love, in plenty of occasions the results were unsatisfying to say the least. But I would be curious to see how the movie, or movies, based on “The Godless World” would look like. Who would play the characters I liked (I see Kanin played by Christian Bale, but that is an entirely subjective opinion), who would direct, would the movie setting match my imagination? Questions that would receive answers in case of “The Godless World” becoming a movie. Until then, I’ll rely again on the imagination and picture such images in the light of my interview of Brian Ruckley:

That said, there are individual scenes in the books that I think would be good on a big screen (I’d like to see the big battle in a snowstorm in ‘Bloodheir’, as directed by Ridley Scott, for example). I had never really thought about actors to play my characters until very recently: I was sitting watching Quantum of Solace, and it suddenly occurred to me that Daniel Craig would be quite good to play Taim Narran. He might need to be a few years older, but other than that he would fit rather well.
Posted by Mihai A. at 1:15 PM

I've book 1 and book 3 on my shelf but not read them yet. I best get cracking before I miss yet another series before TV gets it!

Jamie, I love these novels. I highly recommend them. And I know about the shelves with unread books, mine haunt me each day :)