"Rose of Fire", a short story by Carlos Ruiz Zafón 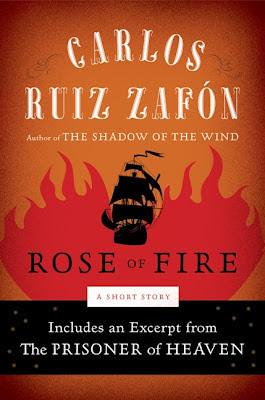 For a very long time I was not instantly mesmerized by one novel as I was by Carlos Ruiz Zafón’s “The Shadow of the Wind”. It was the spark that turned Carlos Ruiz Zafón in one of my top favorite writers in the blink of an eye. Since then I enjoyed with great delight all of his other novels, the three of “The Trilogy of the Mist”, “The Angel’s Game” and the sensible “Marina”. There is no secret anymore that Carlos Ruiz Zafón released a new novel, “The Prisoner of Heaven” (El Prisionero del Cielo), on November last year. And that his latest novel featuring the lovely characters of Daniel Sempere and Fermín Romero de Torres and the mysterious Cemetery of the Forgotten Books found its way quickly to the English market, the UK edition already released on 21st of June by Weidenfeld & Nicolson and the US edition due to be published on 10th of July by Harper Collins. To celebrate the release of “The Prisoner of Heaven” Harper Collins also published an e-short story by Carlos Ruiz Zafón, “Rose of Fire”.

Set at the time of the Spanish Inquisition in the fifteenth century, "Rose of Fire" tells the story of the origins of the mysterious labyrinthine library, the Cemetery of Forgotten Books, which lies at the heart of Carlos Ruiz Zafon's novels The Shadow of the Wind, The Angel's Game, and now The Prisoner of Heaven.

“Rose of Fire” can be read for free in any electronic format.
Posted by Mihai A. at 1:35 PM

Thanks for posting about Rose of Fire.
I bought a digital copy for 0,49 EUR.

Oh, the problems with the buyer locations. I hate that. This time I got lucky with a Kindle book, I got a free copy through Amazon US.

I don't suppose you have any idea where I might get a copy of this short story. Harper Collins, when I contacted them direct, simply said it is no longer available (which is pretty stupid for an ebook) and I cannot find it any longer on any of the standard seller locations such as Amazon. This is most frustrating!