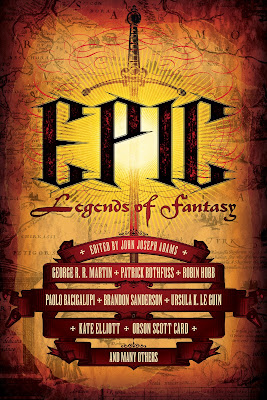 Since I first read J.R.R. Tolkien’s “The Lord of the Rings” my love for epic fantasy grew and still grows. In time it also became my favorite literature genre and although now it share the spoils with another genre I always read with interest the adventures that fall into my hand. One such adventure or more precisely adventures are waiting to be lived this year with the upcoming new anthology edited by John Joseph Adams, “Epic”, due to be released by Tachyon Publications on November. With “Epic” I am not thrilled only by the prospect of reading in one of my favorite genres, but looking at the mighty impressive line-up of authors also to check one of the most interesting collections of fantasy stories I’ve seen this year. And with such an awesome table of contents I am afraid that November seems so far away.

There is a sickness in the land. Prophets tell of the fall of empires, the rise of champions. Great beasts stir in vaults beneath the hills, beneath the waves. Armies mass. Gods walk. The world will be torn asunder.
Epic fantasy is storytelling at its biggest and best. From the creation myths and quest sagas of ancient times to the mega-popular fantasy novels of today, these are the stories that express our greatest hopes and fears, that create worlds so rich we long to return to them again and again, and that inspire us with their timeless values of courage and friendship in the face of ultimate evil—tales that transport us to the most ancient realms, and show us the most noble sacrifices, the most astonishing wonders.
Now acclaimed editor John Joseph Adams (Wastelands, The Living Dead) brings you seventeen tales by today's leading authors of epic fantasy, including George R. R. Martin (A Song of Ice and Fire), Ursula K. Le Guin (Earthsea), Robin Hobb (Realms of Elderlings), Kate Elliott (Crown of Stars), Tad Williams (Of Memory, Sorrow & Thorn), Patrick Rothfuss (The Kingkiller Chronicle), and more.
Return again to lands you’ve loved, or visit magical new worlds. Victory against the coming darkness is never certain, but one thing’s for sure—your adventure will be epic.

Foreword by Brent Weeks  "Homecoming" by Robin Hobb  "The Word of Unbinding" by Ursula K. Le Guin  "The Burning Man" by Tad Williams  "As the Wheel Turns" by Aliette de Bodard  "The Alchemist" by Paolo Bacigalupi  "Sandmagic" by Orson Scott Card  "The Road to Levinshir" by Patrick Rothfuss  "Rysn" by Brandon Sanderson  "While the Gods Laugh" by Michael Moorcock  "Mother of All Russiya" by Melanie Rawn  "Riding the Shore of the River of Death" by Kate Elliott  "The Bound Man" by Mary Robinette Kowal  "The Narcomancer" by N. K. Jemisin  "Strife Lingers in Memory" by Carrie Vaughn  "The Mad Apprentice" by Trudi Canavan  "Otherling" by Juliet Marillier  "The Mystery Knight" by George R. R. Martin
Posted by Mihai A. at 1:30 PM

I want to, nay, must have this in my possession. How many kidneys does it require?

Michael, an excellent line-up. I am looking forward to this anthology :)

maybe I'm mistaken, but don't some of the pieces already appear in GRRM&Dozois' Warriors?

As Mihai says, the Martin did appear in Warriors. The other stories are all previously published as well, taken from a variety of other sources.

Thank you very much John for your comment. I am looking forward to read your new anthology :)

thanks for clearing that out.

the names do sound familiar, so I probably know them from somewhere else...

...or i've just heard news about them :D