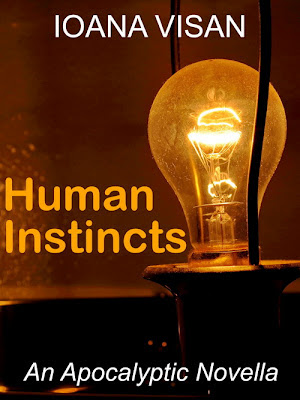 Following the footsteps of Marian Coman another young Romanian speculative fiction writer, Ioana Vișan, comes to the English publishing market. However, her novella, “Human Instincts”, an apocalyptic science fiction story, is not Ioana Vișan’s first presence on the English speculative market. That debut was made with a piece of flash fiction, “Unhinged Reality”, published on Every Day Fiction on September last year. I must admit that my first encounter with Ioana Vișan’s fiction was not memorable, “Plimbarea de dimineață a domnișoarei Vu” (The Morning Walk of Miss Vu) published in the anthology “Steampunk: The Second Revolution” was a good for setting the mood of the collection, but not one of the best stories of the respective anthology. That doesn’t mean that I am not happy to see another Romanian speculative fiction writer published in English. It is true that self-published for the moment, but since it seems to be a tough market to break, it is only a first step hopefully. But no matter what the future will hold for the Romanian speculative fiction I am looking forward to read Ioana Vișan’s “Human Instincts” too, her apocalyptic novella that can be found on Smashwords or on various Amazon sites (UK, US, FR, DE, ES, IT). And for more information about Ioana Vișan or her fiction you can visit her website here.

Dr. Deanna Nichols is a geneticist searching for a cure to save the world. After the war nearly destroyed it by releasing an aggressive virus, it was the vaccine that killed the humanity’s chances for progress and survival. Deanna feels guilty because she has participated in creating the vaccine, and General Mackenzie never lets her forget that.
Their luck changes when they are contacted by the convicts held in a secret military prison hidden in the arctic desert. The C deviance criminals are willing to negotiate and provide unaffected DNA samples in exchange for supplies and a visit paid by the doctor herself. Suddenly there’s hope, so Deanna embarks on a dangerous journey to a grittier reality than she had expected.
Could a woman alone save the world?
Posted by Mihai A. at 1:25 PM

Thank you for helping me promote the novella, Mihai.

It is my pleasure, Ioana :)

I admire the valuable information you offer in your articles.Bookmaking it and recommend to my friends.I am quite sure they will learn lots of news.