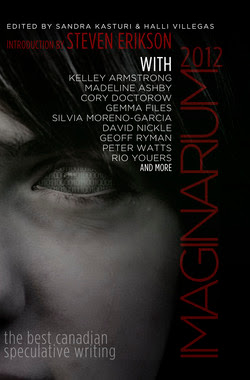 I am fervent reader of Ellen Datlow and Stephen Jones’ annual collections of best horror stories, but lately two more such annual anthologies gain a special place in my preferences, Paula Guran’s “The Year’s Best Dark Fantasy & Horror”, at its third edition this year, and Liz Grzyb and Talie Helene’s “The Year’s Best Australian Fantasy and Horror”, which will see its second edition released soon. These proved to be excellent sources of quality fiction and always gave me a chance to discover one or two voices that were a mystery to me until that point. Chizine Publications together with Tightrope Books propose a new such annual collection, but not only with the sole chance of reading very good speculative fiction, but also to explore a year’s best from the Canadian point of view. I said that I enjoy Ellen Datlow, Stephen Jones and Paula Guran’s collection, but one feature that brought Liz Grzyb and Talie Helene’s anthology together with those three collections was the chance to make an annual journey in the Australian speculative fiction. The opportunity to do a similar journey in the Canadian speculative fiction brought Sandra Kasturi and Halli Villegas’ “Imaginarium 2012” to my attention. “Imaginarium” gives me a great chance to make Canada an annual destination of my fiction travels, to meet some of the authors I enjoy, such as Amal El-Mohtar, Gemma Files, Lisa L. Hannett and David Nickle, and to discover new ones. And since it seems that “Imaginarium” already promises a few very interesting things I hope this is the first journey of many.

Edited by Sandra Kasturi and Halli Villegas, Tightrope Books and ChiZine Publications have united in a joint venture to produce a yearly anthology of speculative short fiction and poetry (science fiction, fantasy, horror, and magic realism).
Canadian speculative fiction has been increasingly recognized internationally for the calibre of its authors and their insight into the nature of social and religious identities, the implications of new technologies, and the relationship between humankind and its environments.
At their best, these stories disrupt habits, overcome barriers of cultural perception to make the familiar strange through the use of speculative elements such as magic and technology. They provide glimpses of alternate realities and possible futures and pasts that provoke an ethical, social, political, environmental and biological inquiry into what it means to be human.

“Introduction” by Steven Erikson
“Looker” by David Nickle
“The List” by Kelley Armstrong
“Biting Tongues” by Amal El-Mohtar
“Bleaker Collegiate Presents an All-Female Production of Waiting for Godot” by Claire Humphrey
“Split Decision” by Robert Runté
“The Cinder Girl” by Peter Chiykowski
“The Candle” by Ian Rogers
“Through the Door” by Susan Ioannu
“Signal to Noise” by Gemma Files
“The Ones Outside Your Door” by Neile Graham
“Down Where the Best Lilies Grow” by Camille Alexa
“Hide” by Rebecca M. Senese
“What We Found” by Geoff Ryman
“Lie-Father” by Gemma Files
“Centipede Girl” by Ada Hoffmann
“Clockwork Fagin” by Cory Doctorow
“Selected Haiku” by George Swede
“Pure” by Rio Youers
“10 things to know about staplers” by Carolyn Clink
“Laikas I” by Kathryn Kuitenbrouwer
“On the Many Uses of Cedar” by Geoffrey W. Cole
“Obscured” by Rhonda Parrish
“Hawkwood’s Folly” by Timothy Reynolds
“Razor Voices” by Kelly Rose Pflug-Back
“The Bean-Sidhe Calls in Owl-Light” by Neile Graham
“Fur and Feathers” by Lisa L. Hannett
“Breathing Bones” by Peter Chiykowski
“The Education of Junior Number 12” by Madeline Ashby
“One Quarter Gorgon” by Helen Marshall
“A Puddle of Blood” by Silvia Moreno-Garcia
“Nothing but sky overhead” by David Livingstone Clink
“The Kiss of the Blood-Red Pomegranate” by Kristin Janz
“Charm” by Anna Mioduchowska
“Final Girl Theory” by A.C. Wise
“To Live and Die in Gibbontown” by Derek Künsken
“Beautiful Monster” by Helen Marshall
“Malak” by Peter Watts