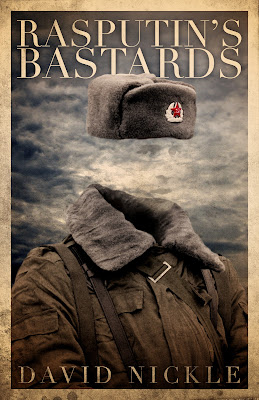 The Russians of “Rasputin’s Bastards”
by David Nickle

My novel “Rasputin's Bastards” is big; the biggest book I've written thus far.  My editor, Sandra Kasturi, nicknamed it the Fat Bastard. I call it my Russian Novel—in part because of its Tolstoy-like girth, but also because it is, well, Russian. While I dip my toe in a lot of nationalities and ethnicities to tell this story of psychic spies before, during and after the Cold War—really, in my re-imagined history of the invisible Great Game, it's the Russians who get it right.

I was drawn to writing about Russians honestly; it's in my blood.

My grandmother and her sisters escaped the Russian Revolution, after her father had the misfortune to sit in one of the three Dumas (my mother thinks the first, I think the second), and faced some unpleasant questions, and a fierce beating, from the aristocracy after its dissolution. They came to Canada without much money, education, or hope.

My grandmother Olga was the looker of the family, and she also could sing—and none of that led to great wealth it gave her an exciting life in Depression-era Toronto. In the 1920s and 1930s, she tried singing (it didn't work out, mostly because her lack of formal education made it impossible for her to learn to read sheet music) and prior to that, acting in the movies.  There is a silent reel or two out there somewhere, in which she plays an Indian Princess, swept over Niagara Falls at the film's climax.

During a trip to California, I am told she went on a date with Boris Karloff, who was a perfect gentleman, and therefore an exception to the sorts of fellows she met there, who were mashers, one and all.

This was before my time, though, and the information was mostly delivered to me via my mother. My grandmother would not trouble children with stories of the Depression in Toronto or Hollywood debauchery; rather, she would spin fanciful tales of her childhood, wandering from village to village in the Ukraine in the early 1900s, where she would charm restless horses, solve problems that vexed the villagers and delight all who met her.

Her Russia was a dreamy place, and although even as a small child I suspected it was an unrealistically dreamy place, it struck me as being worth a visit. Some of the more colorful visions that emerge in “Rasputin's Bastards” probably have their genesis in my Babushka's tall tales.

As to other ethnicities that emerge in the novel. There are Romanians who generally are quiet and terrifying; I employed them mostly because of the reputation of the Romanian Securitat at the time, as being exceptionally dangerous. I gravitated to Turkey for similarly plot-driven reasons: I wanted antagonists and supporting characters who came from that part of the world but also a more secular tradition, and Turkey seemed to fit that bill.

The Americans are, well, Americans. And there are some members of the New York Italian mob, and a young woman from Hong Kong, and a pile of Canadians here and there. Those, I drew as best I could.

But ultimately, my heart was with the Russians in “Rasputin's Bastards”. Those folk, after all, are family. 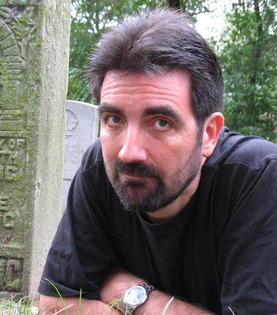 David Nickle is the author of more than 30 short stories, 13 of which have been gathered in the collection “Monstrous Affections”. He is author of “Eutopia: A Novel of Terrible Optimism”, and co-author of “The Claus Effect”, with Karl Schroeder. Years ago, he and Karl won an Aurora Award for the short story that inspired that novel, “The Toy Mill”. Some years later, he won a Bram Stoker Award for short fiction, for a story called “Rat Food” - co-written with Edo Van Belkom. He lives in Toronto, Canada. His website, The Devil's Exercise Yard (http://sites.google.com/site/davidnickle/) has stories on it for free.

More information about “Rasputin’s Bastards” can be found on Chizine Publications website, as well as on the novel’s dedicated site, What is City 512?.
Posted by Mihai A. at 3:20 PM

The cover for this book is awesome. It took me ages to notice there's a face in the clouds. Sounds like a good read too.

It is a great cover, I love it. And although I read only the first quarter of the novel until now I do like it so far :)

I definitely want to read this book.

Michael, it is a very interesting book. I enjoy it so far and I can wait to see how it ends :)