"The Whisper Jar" by Carole Lanham 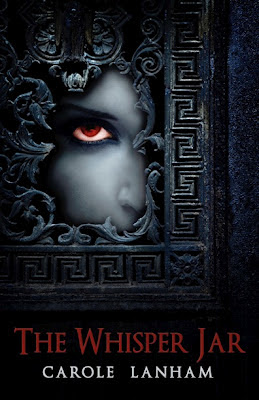 "The Whisper Jar"
by Carole Lanham
Publisher: Morrigan Books
The review is based on a bought copy of the book


Anthologies are one of best ways for discovering new authors, but recently I find myself more and more attracted by the collections of stories signed by one writer. It is an even better method of feeling the power behind the writers’ talent, an extended source in identifying the author’s voice and finding new stories to enjoy. With this the driving thought and with an open mind I turned the first page of Carole Lanham’s debut collection, “The Whisper Jar”, and started reading.

“Whisper Jar” – The inhabitants of High Cross start to keep their secrets stored in jars, but when an accident occurs in the Jar House the safe keeping of the secrets is shattered to pieces. Carole Lanham’s collection debuts with this dark poem with lighter tones, but setting the perfect mood for the stories that follow. However, the subject and the characters of the subsequent stories will change. For an even better result.

“Next day she found her little boy, ashamed and blushing pink.
She gave him one good spank and poured her jam into the sink.
“I don’t know what you have done, but put your mouth right here.
Confess your crime to this fruit jar as though it were God’s ear.””

“The Good Part” – After a mysterious stranger have lived on the nearby field for a few days, Etta suffers changes that her brother, Gidion, cannot fully understand. But when the lives of the people Gidion loves are threatened by this change he has to make one very important choice. The main theme of “The Good Part” is only hinted, but Carole Lanham returns to the roots of this subject and gives  back its dark side in an era dominated by misplaced romance.

“Keepity Keep” – Alban and Gage Turnbull find Petaloo, a fairy who becomes their best friend, in the garden of their house. But when the boys grow older the competition for Petaloo’s attention sharpens. The reader is left in mourning for the childhood that Alban and Gage Turnbull leave behind. Every little step of the boys’ metamorphosis into adults is evoked in the pages of this story with the power of personal experience.

“The Blue Word” – In the Salvation House orphans are raised and schooled until the age of 18 when in a graduation ceremony they are released from the institute. But the mystery surrounding the graduation process might not fit any of the students’ dreams. A post-apocalyptic setting in which the death of a dream can be the most terrifying side of the horror element.

“Maxwell Treat’s Museum of Torture for Young Girls and Boys” – After Hayden’s parents are involved in a tragic accident he moves in the house of his cousins where the Treat brothers are putting together a museum dedicated to torture. Melancholic, frustrated and cheerful all together, the story holds the reader on the toes, always keeping things around the corner in such fashion that not even the smallest of glimpses or glances can be seen.

“Friar Garden, Mister Samuel, and the Jilly Jally Butter Mints” – The sisters Estrella and Esme and Samuel, the son of the household employed nurse, escape the everyday reality with the help of the colorful Jilly Jally Butter Mints. Imagination is literally brought to life here and the toys and games are enhanced by magic. The misunderstandings can bring the tragic into play though and only the narrow minds of adults can give them power over magic.

“The Reading Lessons” – Lucinda and Hadley are two friends, whose destinies are not meant to cross, with a love for forbidden books and readings. Lucinda, despite her caprices, is the gravitating point for Hadley and their usual play almost an addiction. And like any addiction no good can come out of it.

“The Adventures of Velvet Honeybone, Girl Werewuff” – The second poem of the collection, this time untouched by the lighter tones of the first one, is a replay of the Little Red Riding Hood with the added touch of one particular mythological aspect and in the personal and excellent manner of Carole Lanham.

“The Forgotten Orphan” – Barnabas, one of the orphans of the Asylum of Fatherless Children, discovers what is hidden behind the security door of the attic. Carole Lanham places the story for the grand finale of this mighty collection again in an orphanage. But this time, Asylum of Fatherless Children (I can’t imagine a more haunting name for an orphanage), is not the place of safety and refuge that Salvation House (“The Blue Word”) is. It is not easy to forget the characters of “The Forgotten Orphan”, no matter how much time they spend on the stage of the story. It is even harder to grasp the dimension reached by the secret hidden behind attic doors, secret more terrible than the monsters Barnabas and his friends imagine living behind those doors.

Perhaps secrets might be kept in jars, primarily in whisper jars, but Carole Lanham knows to unscrew the lids of these holders of secrets and spill the contains on paper. Particularly those put on storage by children or adolescents, the main characters of all the stories from “The Whisper Jar”. Childhood always wakes the reader’s nostalgia and Carole Lanham masterfully brings this feeling to life. But every single time she challenges the common, pushes and twists the boundaries. Amusement shifts to tragedy, innocence turns into sexual innuendo, the magical, literally in places, time of play becomes a moment of cruelty, all with the spontaneity of which only the children are capable of. None of these transformations, however, are straightforward. Every little change is made with an admirable subtlety, not one of them offensive and all natural. Every time the unexpected is an important ingredient and a seasoning element of surprise.

The same goes for the terror component, Carole Lanham does nothing for the sake of horror or shock, she doesn’t use blood and violence in an attempt to terrify her readers by all means. She makes the readers uncomfortable in a refined and intelligent manner and putting an attractive language to work in favor of her stories. With such qualities reflected from “The Whisper Jar”, Carole Lanham already announces herself as a prominent figure of the genre from her debut collection. As a matter of fact, the horror genre needs more such writers to raise it to its deserved and true value.
Posted by Mihai A. at 3:30 PM

This really sounds interesting. Thanks! :)