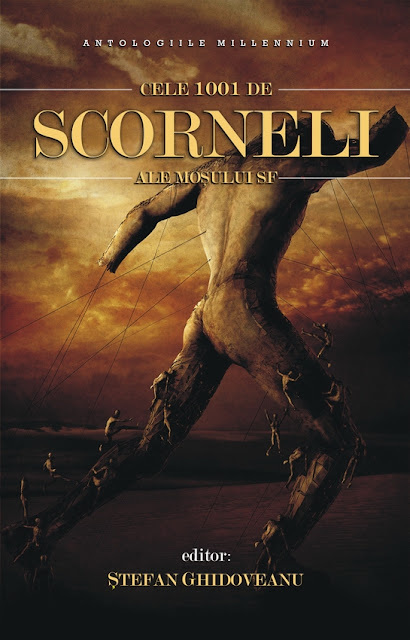 Ștefan Ghidoveanu is a speculative fiction writer, translator, critic, essayist and editor, born in 1955 at Bârlad. He made his debut in 1982 with a story entitled “A collection of art” and won several local awards throughout his career. In December 2010 started his personal blog, Moshul SF (The SF Crone), with one of its features a series of posts, “Cele 1001 de scorneli ale moshului S.F.” (The S.F. Crone’s 1001 inventions), where Ștefan Ghidoveanu publishes original short stories of speculative fiction written by some of the most important names of the Romanian SF&F scene. Starting from this initiative, Ștefan Ghidoveanu decided to edit an anthology, “The S.F. Crone’s 1001 inventions”, with some of the stories published on his blog, but mainly with original fiction from the authors present on the respective posts, such as Ioana Vișan, Ștefana Czeller, Ana-Veronica Mircea, Narcisa Stoica, Marian Coman, Michael Haulică, Florin Pîtea, Liviu Radu and George Lazăr, to name a few. The anthology will be published by Millennium Books and as this publishing house used the Romanian readers already, “The S.F. Crone’s 1001 inventions” has an excellent cover. The artwork is made by the Australian artist, Christopher Haines, who uses a mix of 3d, photomanipulation and painting in his art with wonderful results, as we can see in “Helpless”, the painting that illustrates the book cover of Ștefan Ghidoveanu’s anthology, “The S.F. Crone’s 1001 inventions”.

I’ll get back with details about this new and very interesting collection of Romanian speculative fiction.
Posted by Mihai A. at 1:32 PM

Thank you for your excellent presentation!

Thank you very much, dear sir! I am looking forward to read your anthology. :)