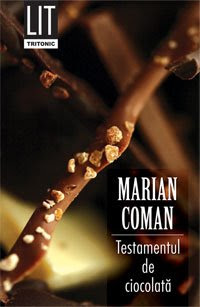 "Testamentul de ciocolată" (The Chocolate Testament)
by Marian Coman
Format: Paperback, 120 pages
Publisher: Tritonic
Imagine a book. A big book, of chocolate. A book with pages which smell of almonds, cocoa and peanut butter and which quiver when they are touched. A live book suspended at the border between reality and fantasy, between life and death, between love and hate. A book like a miraculous gate between here and there. You can bite from its pages and you’ll travel in another world.
Imagine a woman. No, not a woman. Imagine the most beautiful woman in the world. A woman so beautiful that, if He could, God himself would sell his soul for a night with her. Only that, what a mess, what a big mess, the woman is in love. With the devil.
Imagine a little girl. A white kid in a gypsy camp. A beautiful girl with a chocolate book, hurried to fulfill her destiny.
Marian Coman took the Romanian speculative fiction by storm, being awarded with the Kult Award for the Best Debut Volume, “Nopți albe, zile negre” (White Nights, Black Days), in 2005 and with an Encouragement Award from the European Science-Fiction Convention, Eurocon, in 2006.
“The Chocolate Testament” is the Marian Coman’s second published volume. It is a short novel, consisting in four parts. The novel is centered on one character, Cala, a very beautiful woman born in mysterious conditions and who was adopted and raised in a gypsy camp. Each part of the story relates one period from Cala’s life, from childhood until old age and each one of them can be taken as a short story. The stories are told from the first person perspective and have a different storyteller, each time a man. And although Cala is the main character of the book she is never in the front line, but the storyteller takes the leading role. And like the novel not being a typical one, feeling more like a short story collection, so it is not a typical fantasy novel, but a novel of life with fantastic elements.
I like each story that compose the novel, but with a plus for the third part, named as the book, “The Chocolate Testament”. Each story is an interesting one and Marian Coman offers a few surprises along the way. I loved every twist of the book and every turn of the tale shifts the reader across the thin border of reality and imagination. I loved how the author captures the society in his story, as a distant background, but very realistic, with elements from each period and with a behavior of sideways characters which is brutally true. As I said, the story is told from the first person perspective, from four different characters. I was captivated by each voice and although I couldn’t become too attached to any of them, there is not much space to do so, also they aren’t annoying either.
There are a few downturns in the story, not very annoying, but present. For instance, although the book is called “The Chocolate Testament” and the synopsis talks of such a book its presence is rare through the story. With the exception of the third part in which plays an important role it is scarcely mentioned. Also, besides its offer of escape from a tragic situation and condition its part in the life of the main character, Cala, is rather vague. I would certainly have liked to learn more about it. Between the four parts of the story there is quoted an interview with Cala, but I have to be honest, I failed to find their usage in the general line of the story.
I don’t know how long it is since I enjoyed a Romanian author so much, I don’t know if there is a live one. But the way Marian Coman plays with words and the story resulted from this play made me enjoy him a lot. True, I find “Testamentul de Ciocolată” (The Chocolate Testament) to be a bit short and I would have liked to see more of it, but it is also true that it is a good piece of fiction and one that gives hope to the Romanian speculative fiction.
Posted by Mihai A. at 11:59 AM

I like reading your reviews. Too often reviewers are afraid to point to the bad stuff as well as the good stuff.

That synopsis feels like a cheat! Now I'm hungry...and it sounds as though chocolate is merely mentioned in passing. Cheat!

Jon, thank you :)
I hope someday Marian Coman's works will be translated in English, because they are very interesting.

Maria, chocolate is very good, but I love even more chocolate icecream :D

That's fair :>) I love chocolate and after reading your tasty review I need to eat something sweet. I really hope that this book will be translated in English because it sound promising.

Michael, I hope that Marian Coman's works will be available in English some day. And maybe it will come together with a chocolate bar ;D