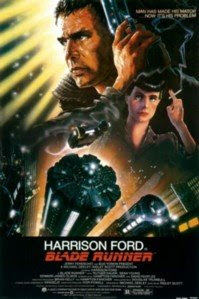 "Blade Runner" is the movie adaptation of "Do Androids Dream of Electric Sheep?" by Philip K. Dick. It was released in 1982, is directed by Ridley Scott and stars Harrison Ford, Rutger Hauer, Sean Young and Daryl Hannah.
Even though we find many differences between the movie and the novel, it is an excellent movie and one of the best ever. The movie catches the atmosphere of the novel, depicting a grim and dark world, a hopeless and pessimistic world. The action is set in Los Angeles in 2019 and Rick Deckard (Harrison Ford) has to find six genetically engineered robots, known as replicants, that escaped from an off-world colony and are in search of their creator and try to expand their life expactancy.
In the general line this is different from the novel (where the action is set in San Francisco in 1992 and Deckard seeks eight androids, replicants is the name used only in the movie, that escaped from Mars, but not in search of their creator), but the basic is the same. The movie manages to capture all the inner conflicts and all the philosophy of the book. The movie has more action than the novel and also, a love story between Rick Deckard and Rachael, more romanced that in the novel. And unlike the novel the movie initiates a dilemma regarding Rick Deckard, that if Deckard is an android or a human.
I love this movie for many reasons, like for Ridley Scott, one of the best film directors ever, for Harrison Ford, the same nice actor from Star Wars and Indiana Jones, for the marvelous interpretation of Rutger Hauer and Sean Young, for the brilliant soundtrack made by Vangelis. This movie is a must see as the novel is a must read.
Posted by Mihai A. at 12:35 PM

Do do like this movie, don't you now? It sounds too old for me to like. The production back in 1982 doesn't score high to what I am used to, but since Harrison Ford is in, I may download it. You never know with movies.

I think is a very good one and you want regret seeing it.